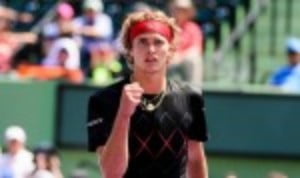 The 21-year-old was presented, as has become tradition, with the eye-catching garment thanks to a commanding 6-3 6-3 triumph over Philipp Kohlschreiber in just 71 minutes.

It’s a seventh career-title for Zverev and it’s the first time this year he has entered the winner’s enclosure. The top seed looked at ease in Bavaria and his latest success sets him up nicely ahead of the Masters double-header in Madrid and Rome.

“I am obviously very happy with how I played," Zverev told atpworldtour.com. "I am very happy to get back-to-back titles here. It is a very special event for me so I am very happy that I could defend my title."

"He played better in this final,” conceded Kohlschreiber, after being denied a fourth victory in Munich. “I think he played a really good match. It was a great week for me and for sure I will be coming back next year."

Elsewhere, Joao Sousa created a slice of history. The 29-year-old became the first player from Portugal to succeed at the Estoril Open after a convincing 6-4 6-4 win over Frances Tiafoe.

At the same venue, there was also delight for Kyle Edmund and Cameron Norrie. The British pair eased past Wesley Koolhof and Artem Sitak 6-4 6-2 to win the doubles title – a first success for the pair at ATP level.

The men’s action at the Mutua Madrid Masters kicked-off today and Richard Gasquet was an early winner. The Frenchman rarely encountered difficulty as he swept Tomas Berdych aside 6-4 6-2.