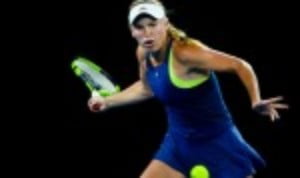 The world No.1 appears to be enjoying life as a major champion and she was confident, assured and assertive against her youthful opponent, who was bidding for a first ever Top 10 victory.

Early breaks of serve were traded before the Dane established baseline control. She won 10 of the last 11 games played to secure a safe passage through to the last sixteen.

It was a chastening experience for Witthoeft, and she made a sharp exit after an error-prone display. The 22 year-old smacked 10 winners but committed 21 unforced errors.

Wozniacki will challenge either Monica Niculescu or Magdalena Rybarikova on Thursday.

Simona Halep, who has aspirations of becoming world No.1 again week depending on results, was equally impressive in her 6-3 6-0 demolition of Ekaterina Makarova.

The Romanian, in her first match since her courageous display in the Australian Open final, almost squandered a double-break advantage in the opening set, however she held firm under pressure and clinched it by six games to three.

“I felt really well on court,” said Halep, after a flawless second set. “It’s my first time back after injury and I felt a little pain but I just enjoyed the match. Everything went really well for me and it’s really nice to be back in Doha.

“I played a great tournament in Australia and I was really sad that I couldn’t win a final for the third time, but I will keep working. Maybe I will reach another final, and maybe I will win it.”

Petra Kvitova prevailed in a seesaw battle with Agnieszka Radwanska 6-7(3) 6-3 6-4 to extend her winning run to nine matches.

“The match was maybe fun for the crowd, but not for me,” joked the smiling Czech. “It was really up and down and it’s always tricky against Aga. You can serve well and still lose. She tries hard and gets everything back, so it’s very difficult.”

The two-time Wimbledon champion faces another high-calibre opponent in the last sixteen. She will encounter No.3 seed Elina Svitolina next, who got the better of Marketa Vondrousova 6-2 6-4.

It was not a perfect day for all the seeded players, though, as Catherine Bellis upset Madison Keys 2-6 6-3 6-0 and qualifier, Anna Blinkova, surprised Kristina Mladenovic 6-3 6-3.