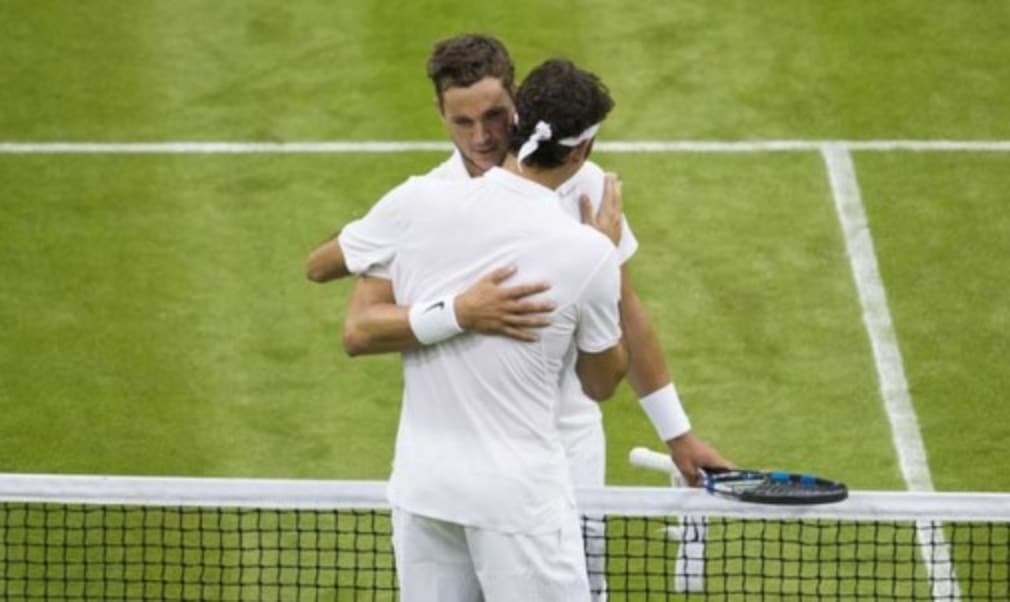 If you're suffering from Post-Wimbledon Blues, here's a few key moments from Wimbledon that might have been forgotten in the excitement of Serena Williams reaching 22 Grand Slams and Andy Murray's second Wimbledon triumph.

Viktor Troicki's meltdown at umpire
When Viktor Troicki was aced by Albert Ramos to set up match point the Serbian was convinced the ball hadn’t touched line and proceeded to let the umpire know in no uncertain terms what he thought of the decision, before dispensing with the apparently unmarked ball into the grounds of the All England Club. “You’re terrible, the worst in the world,” was Troicki’s assessment as he fell to defeat just one point later. Unsurprisingly, the rant continued after the handshake. It had been a while since we had witnessed a full-on John McEnroe moment on the tour.

Marcus Willis
While the tournament ended with a second Wimbledon for a British player ranked second in the world, the first few days were dominated by the story of the man from Slough ranked 770 places below the eventual champion. World No.772 Marcus Willis, who had considered quitting the tour to coach full time, came through six qualifying matches and a first round clash against Ricardas Berankis to face Roger Federer on Centre Court on the first Wednesday. Willis pocketed £50,000 after earning just £230 all year prior to Wimbledon. Not bad for the British number 23.

Tara Moore reaches second round, takes set off Kuznetsova
While all the talk about the British women in the draw centred around Heather Watson and Jo Konta, world No.227 Moore quietly went about her business. The wiildcard defeated Alison van Uytvanck (ranked 100 places above her) comfortably in the opening round, before going on to give former world No.1 and multiple Grand Slam champion Svetlana Kuznetsova a real scare in the second round. The 13th seed ultimately proved too strong over three sets, robbing Moore a chance of following in Heather Watson’s footsteps and playing Serena on Centre in round three.

Nike Dresses
Normally so good at bringing a classy and professional look to the tennis court, Nike suffered somewhat of a fashion faux pas by leaving a little bit too much to the imagination with its Wimbledon range for some of its female athletes. The unusually short number, described by many as a nightie, had to be lengthened in the run up to the tournament after revealing far too much of the players' skin during play. In the end only Canada’s Genie Bouchard, who asked for her outfit to be lengthened, gave the design any air time with a run to the third round, while Sabine Lisicki just flat out refused to wear the garment.

Playing on middle Sunday
It will no doubt be a great pub quiz question in years to come: what happened at Wimbledon 2016 that hadn’t happened since 2004 and only occurred three times previously in the whole history of the Championships? Over 25,000 tickets were sold for the Sunday 3 July at the All England Club as the tournament organisers played catch-up following a week of rain. Glorious summer sunshine covered the SW19 grounds and by the end of play the draw was all ready for the second week. A wonderful novelty, but sadly not something likely to be made permanent.

Cibulkova wedding or final?
Hearing someone is having doubts regarding their wedding plans is enough to make you think the worst. Thankfully, the dilemma facing 19th seed Dominika Cibulkova was more down to a schedule clash, and not a change of heart. The Czech eventually admitted if she made the semi-finals she would have to reconsider the date of her ceremony. The Eastbourne champion was playing well enough to perhaps go further than the last four, but she ran out of steam in the quarter-finals. It all meant her and fiancé Miso Navara could tie the knot as planned on Sunday July 10 in Bratislava.

Djokovic losing to Querrey
Thirty. That’s how many consecutive Grand Slam matches Novak Djokovic had won when he walked on court to play Querrey on Friday evening. Dating back to the 2015 French Open final the Serb had gone undefeated in the biggest matches on tennis’ grandest stages. But nothing lasts forever, and after being unable to overturn a two-set deficit on the resumption of play on Saturday morning, Querrey completed the biggest shock of the Championships of recent years. A massive surprise, but in the context of future majors simply a mis-step on Djokovic’s potential path to greatness.