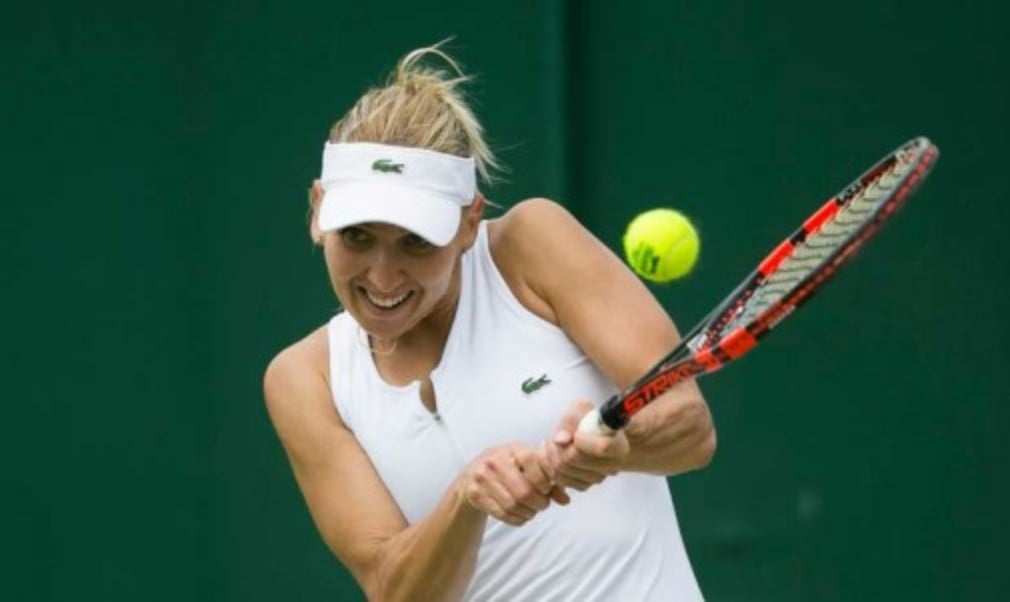 Angelique Kerber is playing with the kind of poise that she showed in Melbourne earlier this year, but for one player, this is a completely new experience.

Six months ago Elena Vesnina, ranked No.122 in the world, lost in the first round of qualifying for the Australian Open. Now the Russian  is through to her first major semi-final after upsetting Andrea Petkovic, doubles partner Ekaterina Makarova and Dominika Cibulkova during her surprise run to the last four at SW19.

“I am very surprised,” admitted Vesnina after her straight sets win over Cibulkova in the quarter-finals. “It was like a dream come true. I was close to being in the quarter-finals a couple of times, but it was not good enough. I was just waiting and waiting for this to happen.

“I had a really difficult beginning of the year. I dropped out of the top 100. I was playing all tournaments starting from qualifications. I had a lot of matches under my belt. It was not easy, to be honest, because I was in the top 30, then I was like 120 or something.”

Standing between Vesnina and the Wimbledon final is six-time champion Serena Williams, and despite having never beaten the American in four previous meetings Vesnina is relishing the opportunity.

“That’s a dream semi-final,” she said. “Nothing can be better than playing against Serena in the semi-finals on Centre Court at Wimbledon. It’s special.

“I admire Serena. She’s No.1 in the world. I respect both Serena and Venus. What they bring to the sport is just incredible.

"Of course, I need to try to win this match. You have to stick to your game, you have to be solid and enjoy yourself on the court. It will be a big challenge for me, but I hope I can accept this challenge.”

Although Vesnina lost in qualifying for the Australian Open, it was the start of a resurgence for the Russian. After winning the mixed doubles final in Melbourne with Bruno Soares, she came through qualifying to reach the quarter-finals in Doha, upsetting Caroline Garcia, Simona Halep and Caroline Wozniacki before falling to eventual champion Carla Suarez Navarro to break back into the top 100.

Further scalps against Venus Williams in Miami and Belinda Bencic and Sara Errani in Charleston, where she reached her first WTA final in three years, helped Vesnina break back into the top 50.

Vesnina joked that she was benefitting from a phenomenon known as “The Lendl Effect”. Andy Murray is unbeaten since former world No.1 Ivan Lendl rejoined his coaching team at the start of the grasscourt season, and the winning mentality is rubbing off.

“Bruno Soares, my mixed doubles partner, [says] that there is a Lendl effect because he’s playing with Jamie Murray, who is the brother of Andy Murray, who won Queen’s,” explained Vesnina. "Bruno said, ‘you will see, you will get it’. Now I am in the semi-final of Wimbledon. I have it now. That’s definitely the Lendl effect.”

First match on Centre Court
One of these players is playing in her 32nd Grand Slam semi-final. The other her first. The odds are stacked against the unseeded Vesnina, who has never even taken a set off Williams in their four previous meetings. But the 29-year-old is taking heart from Angelique Kerber’s win in the Australian Open final.

“I saw how Angelique was sticking to her game from her first to the last,” said Vesnina. “Maybe Serena didn’t play her best tennis, but Angelique used her chances. You have to use your chances against Serena. If she’s giving you that chance, you need to be there. If she’s serving aces all over the place, hitting winners, there is nothing you can do. You just have to stick and wait and be there, stick with her.”

A fast start is key for Vesnina, if she can stay with Williams in the early stages she has a chance of capitalising if the top seed shows any signs of nerves. Stranger things have happened, but Serena is likely to be too strong for the likeable Russian.
Prediction: Serena in two

Second match on Centre Court
The last two times these two have met, the match has gone the distance, and Thursday’s semi-final is likely to go the same way. Both women are in better form than their last two matches, and this semi-final could be one of real quality.

It will be an intriguing clash of styles – Williams boasts a fastest serve speed of 121mph in this year’s Championships – only two miles per hour slower than tournament leader Serena, while Kerber is one of the best returners in the game – she has won a remarkable 51% of her return games – which equates to 23 breaks of serve so far.

However, she was broken six times in her quarter-final win over Simona Halep and the German will be concentrating on improving her success rate on her own serve against the five-time Wimbledon champion.

“I know that my serve should be a little better against Venus,” Kerber admitted. “But I think my serve is not too bad. I know that Simona was returning really well so I will not make too much drama on my serve. [But] I know I have to serve bigger.”
Prediction: Kerber in three