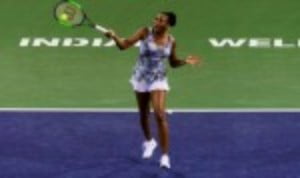 Less than 24 hours after recording a rare victory over her sister Serena, the evergreen 37-year-old was back on court and competing for every point like only she can.

This time Venus overcame Anastasija Sevastova 7-6(6) 6-4. It was a bruising encounter filled with momentum shifts, however it was the crowd-favourite who performed better in the crucial moments.

“It was not an easy match to figure out,” acknowledged the American, who will face either Carla Suarez Navarro or Danielle Collins next. “She {Sevastova] has everything in her game and it was a quick turnaround after the emotions of yesterday.

“It felt like a final (against Serena], but it only got me into the fourth round.”

The Romanian will challenge Petra Martic in the last eight. The Croatian got the better of Marketa Vondrousova 6-3 7-6(4).

Naomi Osaka, who has already beaten Maria Sharapova and Agnieszka Radwanska this week, got the better Maria Sakkari 6-1 5-7 6-1 and will take on Pliskova in the quarter-finals.