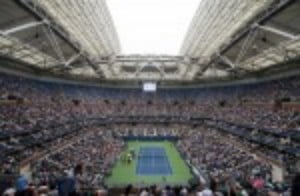 The draw was unveiled at a presentation in the Seaport District of New York, rather than as in previous years conducted live at the Billie Jean King Tennis Centre at Flushing Meadows.

The US Open Experience, as the USTA have called the area, has been used for the last two days to take tennis to the centre of New York with loads of tennis activities for kids, live music and player interviews.

The biggest tennis storyline was probably in the women’s draw, where wildcard Maria Sharapova was drawn against the No.2 seed Simona Halep. The pair has met six times before and Halep has never won. Perhaps their most memorable meeting was the three set final at Roland Garros in 2014.

In the top half of the draw current World No. 1 Karolina Pliskova has a potentially more straightforward task than some of the other contenders for the World No, 1 spot when she faces Magda Linette of Poland.  Ukrainian Elina Svitolina faces Katerina Siniakova and Angelique Kerber lines up against Naomi Osaka.

This could be one of the most interesting US Open tournaments for many years, with not only the US Open title at stake but also the World No 1 slot, with eight women in possible contention for the top spot.

The US Open has never played host to a Federer v Nadal final and 2017 will be no different. If the two players do meet it will be in the semi final. Nadal starts his US Open campaign against Serbian Dusan Lajovic and Federer plays the young American Frances Tiafoe.

Other match ups of note in the top half of the draw include an all Australian first round between Nick Kyrgios and John Millman, and an encounter between David Goffin and Julien Benneteau. British Player Alijaz Bedene faces Russian Andrey Rublev

In the bottom half of the draw, Andy Murray starts against American Tennys Sandgren and a possible route to the final for him includes Florian Mayer/Rogerio Dutra Silva in the second round, then Diego Schwartzman, Lucas Pouille in the fourth round before a possible quarter final against Jo Wilfried Tsonga and potentially Sascha Zverev in the semis. Sascha Zverev faces a qualifier in the first round.

British player Cameron Norrie who had a straight sets win in the third round of qualifying against Japan’s Go Soeda brings to six the number of British players in the draw.