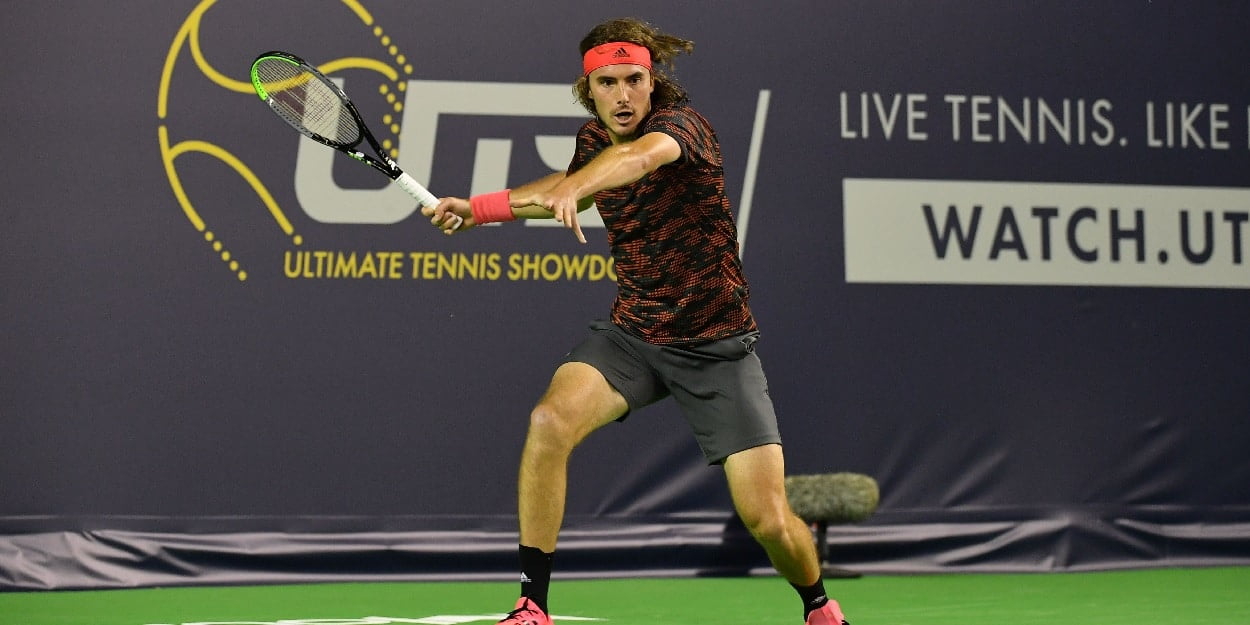 Tsitsipas crushes Paire to close out UTS day one action

In the fifth and final match of day one at the Ultimate Tennis Showdown, Stefanos Tsitsipas took on Benoit Paire in a fiery encounter. The Greek world no. 6 came through a deserving winner, helped along the way by his French opponent’s unbridled temper, as he took the often-one-sided match 24-4 21-6 13-14 15-9.

Tsitsipas began the match strongly, hitting an unreturnable first serve and then raced ahead 7-1 within the first two minutes. Nicknamed “The Greek God” by the tournament, Tsitsipas chose the ‘-1 Serve’ and ‘Steal serve’ as his UTS cards, whilst Paire, “The Rebel”, chose the ‘x3 Winner’ card and like his opponent, the most popular card of the day, ‘Steal Serve’. It was at 7-1 that Paire chose to use the ‘x3 Winner’ card, meaning that if he won either of the next two points with a clean winner, he would be awarded three points instead of one. Unfortunately for him, he made errors on both occasions and Tsitsipas swiftly advanced to 16-4 with just three minutes left on the clock. In desperation, Paire began hitting wildly and in doing so he gifted Tsitsipas the widest win margin of the day as the set ended 24-4 in the Greek’s favour.

The second quarter started a little more promisingly for Paire as he won the opening two points on serve, He led again at 4-2 but the frustration set in once more when he missed a shot, allowing Tsitsipas to level at 4-4. Paire’s coach requested a time out with his man down 6-4 but this did nothing to turn the momentum his way. Tsitsipas was in great form and hit an unstoppable winner to move up 8-4. Here, Paire again tried his luck with the ‘x3 Winner’ card but again he could not capitalise and “The Greek God” continued his tear. At 12-4, Tsitsipas rubbed salt into the wound by using his ‘Steal Serve’ card, winning both and forging even further ahead. He won 17 consecutive points before Paire finally got himself back on the scoreboard to make it 19-5. This was too little, too late, Tsitsipas won the quarter 21-6 and it was beginning to look like Paire had no chance of turning the match around.

“The Rebel” chose to gamble his ‘x3 Winner’ card early in the third with the score at just 1-1. Tsitsipas hit a great winner of his own to neutralise the first attempt but then Paire hit yet another error on the second. His temper flared as he rocketed a ball out of the court but one of the quirks of the UTS format is that there are no violations for ball/racquet abuse and so the match continued. At 5-1 to the Greek it looked as if this would be a repeat of the previous two quarters but then Paire started to channel his anger and play more freely, hitting the ball cleanly and ferociously to claw his way back to 5-5.

The Frenchman double faulted to fall behind again but kept his composure this time and levelled once more at 6-6. He fell behind 9-7 but used the steal ‘Steal Serve’ card, won both points, and kept the quarter close. With 90 seconds left to play, there was still nothing between the two as they sat tied at 12-12 in what was a complete change from the previous two quarters. Paire needed to win this to give himself any chance of winning the match and at 13-13, he came out on top of a spectacular point to clinch it 14-13. Tsistsipas’ team confusedly called a coaching time out with just five seconds left on the clock but it was already too late to make a difference.

Paire’s frustrations returned immediately in the fourth as he lost his opening point on serve, but he kept things together to stay tight with his opponent through to 5-5. Tsitsipas, not for the first time, then went over the allotted 15 seconds allowed for serve and was penalised, giving Paire the lead. At 6-6 he played his ‘x3 Winner’ card but for the seventh and eighth times he could not find the winners when needed and the pair remained level at 7-7.

At 9-9, with less than three minutes to play, Tsitsipas was again penalised on serve but at the expense of much confusion with the scoreboard. The umpire appeared to get muddled and the net result was that Paire was given an extra point but Tsitsipas retained his serve. This incensed Paire who continued to vent his frustrations to the umpire (in French) for the remainder of the match as he capitulated, and Tsitsipas dominated in the closing exchanges to emerge a comfortable winner. The scoreboard at the end of the match showed 16-10 but this was quickly amended in later graphics to 15-9, seemingly due to the confusion over the earlier point penalty. Tsitsipas had 37 winners to just 7 unforced errors, and Paire was hampered by hitting 6 double faults.

Earlier in the day, Popyrin beat Benchetrit 3-1, Berrettini beat Brown by the same score, and Gasquet and Lopez both came through their matches 3-2 in sudden death against Goffin and Pouille respectively.

Day Two’s matches on Monday 15th June are as follows: