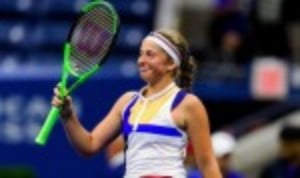 Thriving on the big stage

The Latvian advanced to the last 32 of the US Open for the first time after dominating Sorana Cirstea 6-4 6-4.

“It’s nice to play on the big courts because I like to play in front of a lot of people,” the reigning French Open champion said. “I enjoy when there is a lot of people watching me. I enjoyed it today.”

In her first round match on Tuesday, Ostapenko was given an unexpected opportunity to play inside the iconic Arthur Ashe Stadium. Her match against Lara Arruabarrena was affected by rain and the pair got the chance to finish their duel on the biggest court in the world.

“When Rafa [Nadal] finished his match, we went on court and played a match. I'm really happy that I could have a chance to play on a big court”.

Having made the third round or better at all the majors this year, the 20 year old is attempting to qualify for the WTA Finals in Singapore. She is currently in eighth position and it would be a significant achievement if she booked her spot at the glamour event in October.

Probably my goal is to get to Singapore, but it’s also just to play as good as I can for the rest of the year,” remarked the Latvian.

Ostapenko’s mother, who was her first coach, traveled with her regularly until recently. Now she has former Spanish player, Anabel Medina Garrigues, by her side. The pair first got together in the 2015 off-season, but Garrigues was still a WTA player at the time and unable to fully commit to a coaching role.

The two kept in touch and after a trial period in Asia last year, the pair joined forces on a permanent basis. The duo did not have to wait long for success and Garrigues was in Ostapenko’s box when she won her first Grand Slam title at the French Open in June.

Ostapenko says she now takes advice from both of them. “My mom knows me the best, and Anabel has some experience on the tour. Both of them can help me.”

Having not won a match since her quarter-final defeat to Venus Williams at Wimbledon, exiting Toronto and Cincinnati in the first rounds, it seems the No.12 seed saves her best for the majors.

Ostapenko prefers to keep a low profile and she is unlikely to be seen on site during her days off. “On the day before I play a match, I prefer to stay in my room and just prepare – and not go out anywhere,” she said.

Her opponent in the third round is Daria Kasatkina, another player born in 1997.