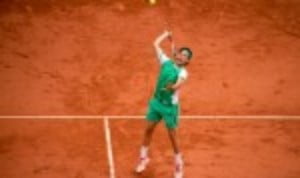 The Austrian powerhouse squandered a sizeable 5-2 lead in the opener before recovering impressively to ensure there will no 51st meeting between Djokovic and Rafael Nadal on the picturesque Cote d'Azur.

Thiem has developed quite a reputation as a clay-court specialist – and his prowess on the red stuff continues to grow. The 24-year-old is a formidable foe on his surface of choice, and his brutal baseline hitting eventually weakened and then demoralised his latest opponent.

Djokovic’s lack of competitive action contributed to his demise, however his display will only have encouraged his army of supporters. His backhand may have misfired at critical junctures, but his desire to succeed was evident.

The 30-year-old received a code-violation warning for an audible obscenity after dropping serving in the fifth game of the second set. It was a show of emotion from the 12-time major champion that has been sorely lacking in recent times, and it offered a timely reminder of his will to win.

Thiem squandered three set-points in the first set before eventually losing it in a one-sided tiebreak. It was a gut-wrenching finale to an opening that had offered so much promise, but he recovered well from the disappointment.

The 24-year-old saved a break-point in the early stages of the second set before dominating the centre of the court and inflicting significant punishment on his overpowered opponent.

The Austrian won five games in succession to take the contest the distance – and the decider was equally as enthralling.

Both players rattled through service games until the seventh game. Thiem carved open a break-point chance and seized his opportunity with a thunderous backhand down the line that floored his rival.

Djokovic had been pushed to the canvas, and two games later he was knocked out the competition.

Thiem will encounter Nadal next. The Spaniard eased into his 14th consecutive quarter-final in Monaco with a 6-3 6-2 win over Karen Khachanov. Richard Gasquet netted his 500th career victory by defeating Mischa Zverev 6-2 7-5 and Kei Nishikori outlasted Andreas Seppi 6-0 2-6 6-3.

Earlier in the day, Grigor Dimitrov made it through to the quarter-finals of a clay-court event for the first time in two years after defeating Philipp Kohlschreiber 4-6 6-3 6-4.

Milos Raonic was expected to challenge Marin Cilic later today, however he has pulled out with a right knee problem sustained earlier in the tournament. It’s yet another injury blow for the big-serving Canadian.