The shutdown quiz: Questions and answers

Have you been taking advantage of the break in play to brush up on your knowledge of the sport? Here are 60 questions to put your tennis brain to work.

HAVE YOU BEEN PAYING ATTENTION?

1 How many matches had Novak Djokovic lost in 2020 before competitive tennis was suspended?

2 Which is the only country with two women currently represented in the world’s top 10?

4 What was the only tournament in which Rafael Nadal played doubles this year before the lockdown?

5 Which former Australian Open champion ended her career at this year’s tournament?

6 Who reached his first Grand Slam singles semi-final at this year’s Australian Open?

7 In which competition was Johanna Konta beaten by Tan France in March this year?

8 Who is the only man apart from Novak Djokovic, Cristian Garin and Gael Monfils to have won two tour-level titles this year?

9 Why did Dalila Jakupovic retire midway through her qualifying match against Switzerland’s Stefanie Vogele at the Australian Open?

10 Which player currently ranked in the top 10 of the WTA rankings has yet to play a match this year?

1 Who has won all 29 of the Davis Cup singles rubbers he has played since losing his first to Jiri Novak in 2004?

2 Who won more Grand Slam singles titles as a teenager than any other player?

3 At 20 years and nine months Lleyton Hewitt became the youngest player to do what in November 2001?

4 In the open era who is the only woman to have lost only one tour-level singles match in a calendar year, having played at least 50 matches in that year?

5 Who set an ATP record of 46 successive tour-level victories between July and October 1977?

7 Between July 1974 and February 1983 only three players topped the men’s singles world rankings. Who were they?

9 Who won his first Grand Slam title at Wimbledon in 1992 and his last at the Australian Open in 2003?

10 Who has won the most mixed doubles Grand Slam titles?

1 “Where I grew up in the city of New York, it’s got a lot of energy. My parents are Irish-American, so there was a bit of yelling going on in my house, but it seemed normal.”

3 “I’ve seen other men call other umpires several things. I’m here fighting for women’s rights and for women’s equality and for all kinds of stuff. For me to say ‘thief’ and for him to take a game, it made me feel like it was a sexist remark.”

5 “I know what I’m capable of. Just depends. I’m a great tennis player, but I don’t do the other stuff. I’m not the most professional guy. I won’t train day in, day out. I won’t show up every day.”

6 “The dream comes true. I’m here in the draw and I’m playing tennis again. It was a difficult time for me, of course. It wasn’t easy, but I’m happy that I’ve worked through this and I can play tennis and I can be in the draw. I know that my hand is not perfectly ready. It’s still not 100 per cent ready, so we will see how everything goes.”

7 “I didn’t start a war. Nobody died. I only lost a tennis match, nothing more.”

8 “I was expecting the best Venus, because I saw her and she was playing very good. I knew she was going to make me suffer and fight for it. When I had those set points against me, I’m like: ‘Hey, it’s normal. I’m playing Venus here.’ So I just kept fighting. And I knew that if I was playing like I was playing during the two weeks, I was going to have eventually an opportunity.”

9 “I could be the best-looking guy in the Duma [Russian parliament], but that’s only because all the other guys are over 60.”

10 “Pressure is a privilege. It only comes to those who earn it.”

1 I became world No 1 in doubles for the first time in my career in July last year at the age of 34. In the same month I played in my first Grand Slam singles semi-final.

2 My father is from Haiti and my mother is from Japan. I won my first two matches against Serena Williams before my 21st birthday.

3 I was born in 1999 and reached my first tour-level final at the age of 18. My father is Uruguayan and my mother is Spanish but I play for another country in the Davis Cup.

4 I was born in New York in 1991. My grandfather played for the New York Knicks basketball team and my mother represented the United States in swimming and volleyball. I have played in the semi-finals at both the US and Australian Opens.

5 I was born in Zagreb in 1993 but switched nationality in 2014. I reached my highest position in the world rankings (No 39) in April last year. I’ve played in four tour-level finals but have yet to win a title.

6 I played in 48 consecutive Grand Slam tournaments between 2005 and 2016 before retiring at the age of 29. I won one Grand Slam title and spent 12 weeks at the top of the world rankings. I am the only woman from my country to have won a Grand Slam singles title.

7 My first tour-level singles final was at a Grand Slam tournament. I have since reached 29 more finals (winning 18 of them) but none have been at Grand Slam level. I won my most recent title last year at the age of 34.

8 I won my only Grand Slam singles title in 2015 at the age of 33 when ranked No 26 in the world. After winning it I played only four more tournaments before retiring.

9 I was born in Wiesbaden, Germany in 1959. I won seven Grand Slam singles titles, the last of them when I was 25 years old. I was world No 1 in both singles and doubles.

10 I set a WTA record in 2014 for the longest gap between titles when I won a tournament in Quebec 16 years and four months after winning in my home country of Croatia.

1 How many British women have reached No 1 in the WTA world rankings?

4 Only two players have won at least one title every year on the ATP tour since 2001. Who are they?

5 What record did Vicki Nelson-Dunbar and Jean Hepner set in Richmond, Virginia in 1984?

8 What distinction was shared by Tracy Austin at Portland in 1977, Mirjana Lucic at Bol in 1997 and Justine Henin at Antwerp in 1999?

9 Who is the last player to have won the men’s singles and men’s doubles titles at the same Grand Slam tournament in the same year?

10 Who is the next player in this sequence: Miloslav Mecir, Marc Rosset, Andre Agassi, Yevgeny Kafelnikov, Nicolas Massu, Rafael Nadal

HAVE YOU BEEN PAYING ATTENTION?

1 None (he won all three tournaments he played: the ATP Cup, Australian Open and Dubai)

7 Konta was runner-up to France, a fashion designer and TV personality, in the Stand Up To Cancer Celebrity British Bake Off

9 Because she had a coughing fit, which she blamed on the air quality as a result of the local bushfires

8 Martina Hingis, who won the women’s and mixed doubles titles

5 Vicki Nelson-Dunbar and Jean Hepner played the longest women’s match in history. Nelson-Dunbar won 6-4 7-6(11) after six hours and 31 minutes. One point in the tie-break lasted 29 minutes and featured 643 strokes

6 Jamie Murray (they have all played doubles with him) 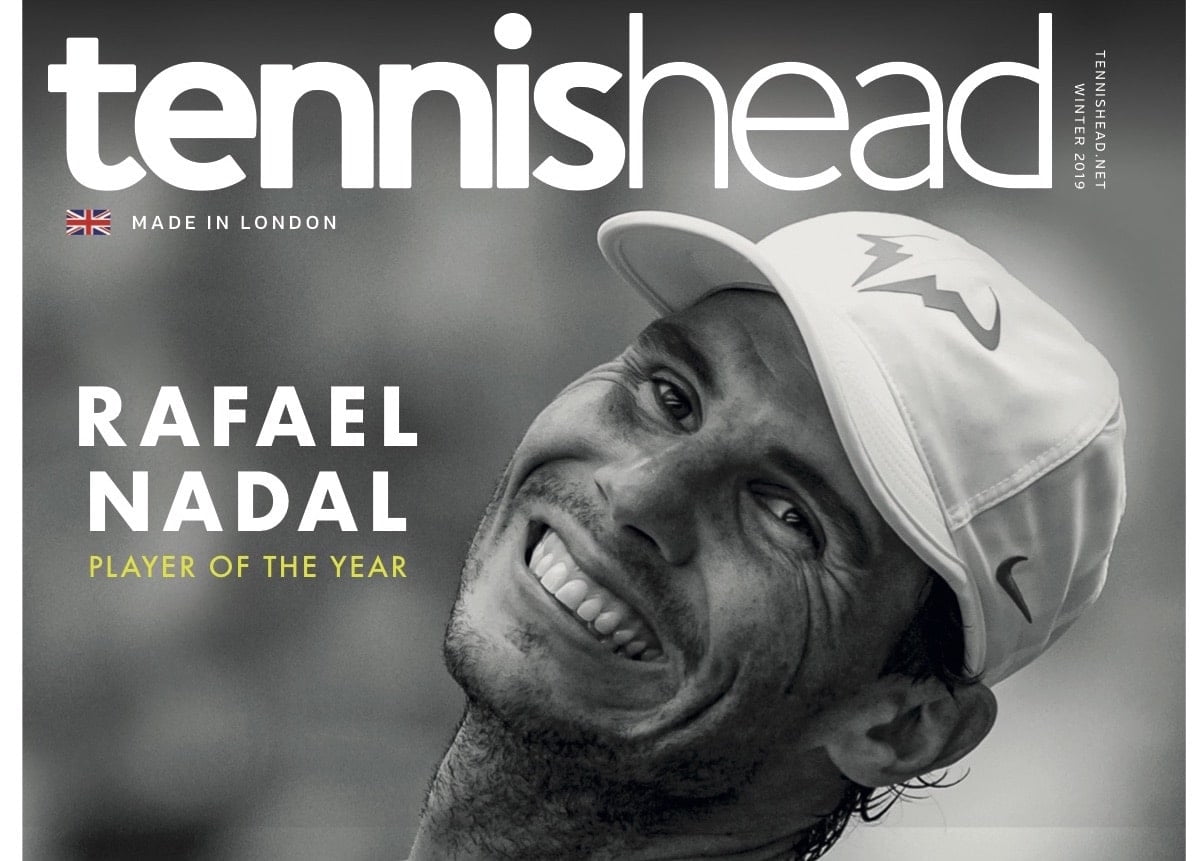 It’s live! tennishead magazine’s November 2019 issue is hot off the press with Rafa Nadal on the cover as our Player of the Year