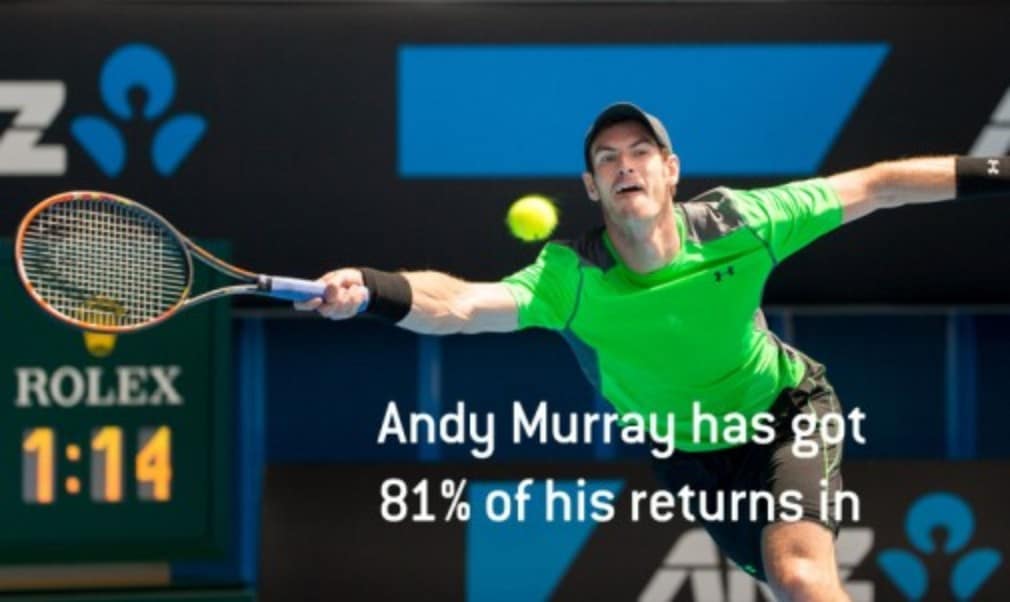 The Numbers Game: Key stats from the 2015 Australian Open

Murray the master on returns

Djokovic may have only dropped his serve once in his first five matches, but Andy Murray is leading the field on returns. Not only has he got 81% of his returns in – a tournament best – he has won 28 return games – more than anyone else, with a success rate of 37%. He has won an impressive 37% of points against the first serve (130 points), while his success rate of 58% against second serves sees him tied for tenth in the leaderboard behind the likes of Tomas Berdych (61%) and Nishikori (60%).

Maria Sharapova may not have the highest ratio of challenges per set – that accolade goes to Daria Gavrilova who made seven challenges in a single match – Sharapova has made 19 in six matches. While she has been right on seven occasions, she has also lost 12 – a success rate of 36.8%. Madison Brengle, a surprise fourth round entrant, may not have much experience of playing on courts with HawkEye – she had zero success on seven challenges.

Raonic serves up a storm

The Canadian may have fallen in the quarter-finals with a straight-sets defeat to Novak Djokovic, but Milos Raonic leads the way when it comes to serving statistics. Having served 114 aces in five matches, he has averaged nearly 23 aces per match. During the fortnight Raonic served 238 unreturnable serves, which equates to 50% of his deliveries, and puts him in third place behind John Isner (60%) and Ivo Karlovic (57%). Romania’s Marius Copil produced the fastest serve of the tournament with a 242kph (150.4mph) bomb during his second-round defeat to Stan Wawrinka.

American Christina McHale’s two singles matches could not have been more different. Her first round win over Stephanie Foretz lasted a whopping three hours and nine minutes – the longest match of the in the women's singles so far. McHale vomited on court at 4-4 in the third set and saved a match point before eventually winning 6-4 1-6 12-10. The third set alone lasted 111 minutes – which would have been in 36th place.

By contrast, McHale was back in the locker room inside an hour as she was convincingly beaten 6-3 6-0 by Carina Witthoeft in 49 minutes in her next match – the fourth fastest match of the tournament. Agnieszka Radwanska claimed the quickest victory when she beat Johanna Larsson 6-0 6-1 in 44 minutes.