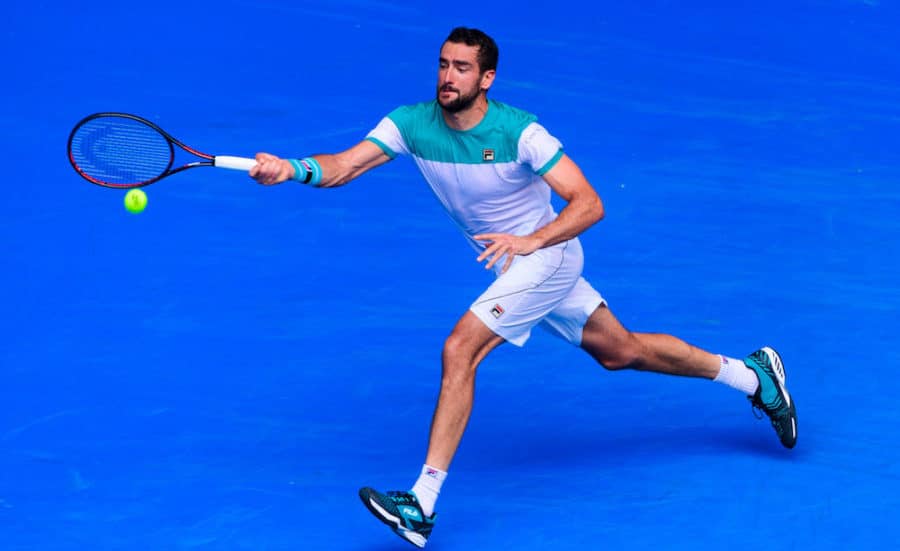 Tennishead coaching: How to hit a running forehand like Marin Cilic

Marin Cilic shows how staying low and keeping your arms in sync can put you in good shape to hit a wide ball, even when it is just inches off the ground

Temptations to be avoided

All players practise running shots to perfect the distance from the ball on contact, which is crucial to playing on the run. There are multiple temptations to resist, such as: lifting the head during or even before contact to see where the ball is going; over-running the ball, causing the body to straighten up and stiffen to make space for the swing; running upright, so that you suddenly have to bend the legs and body during the last stride to get down to the ball; running with the racket in front without splitting the arms to a comfortable running position. The pictures here are easy to follow, so I advise practising the whole movement without a ball first, either with someone filming it or without a racket at the gym in front of a mirror. Good luck, as there are few better feelings than a well-executed running forehand, my best and favourite shot.

David has more than 25 years experience coaching pros to career-high rankings, many of whom have represented their countries in the Davis Cup and Olympics. David, who became an official ATP coach in 2014, regularly contributes to the UK’s tennis media, including BBC Radio 5 Live, The Times newspaper and Sky Sports. In 2014, he released a psychology and coaching book – ‘Locker Room Power: Building an Athlete’s Mind’ which you can read here