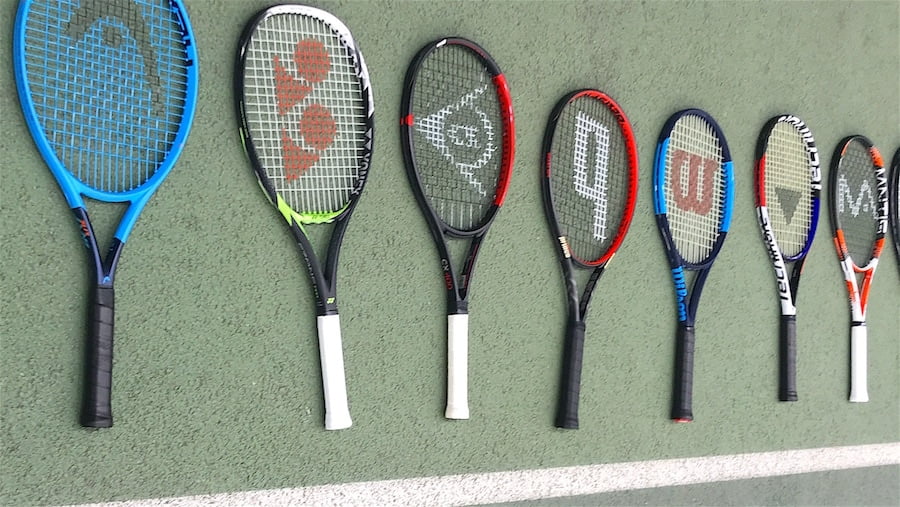 Blinded by the numbers? Confused by the terminology? Not sure how you can tell if a racket is right for you without trying it out? Then look no further as we explain the meaning and implications of the tennis racket specifications used when the tennis brands describe their rackets

Normally found on the inside of the frame of your racket or on the promotional material you receive with your racket, the manufacturers tennis racket specifications are designed to give you more information about the racket you are about to purchase. The categories of specification used by the different manufacturers are normally very similar but does the average tennis player know what they really mean?

Click here to buy tennis rackets, balls, clothes, strings and shoes with a 5% DISCOUNT on the lowest internet price PLUS a free string upgrade (worth £30) from our trusted retail partner All Things Tennis

Measured in ‘square inches’ or ‘sq. in.’

But actually hitting the ball isn’t really the hardest part of tennis, it’s more to do with what you actually do with the ball once you’ve hit it. Hence why the head size becomes more important.

Choose a medium size head (96 sq. in. – 100 sq. in.) if you consider yourself neither very strong or very weak and have an average length swing. (Ask a coach or good player if oyu don’t know how long your swing is)

If you are an advanced player or are reasonably strong or tall with a long swing then a smaller head size (Less than 96 sq. in.) might be right for you. for example, we’d suggest that most men between the ages of 17 and 60 who are over 6 feet tall and in good shape will probably only need a medium or smaller head size racket.

(There is no right or wrong by the way, we are just offering some advice)

This is exactly what you think it is… The total weight of the racket! Simple as that…

With the tremendous advances in technology and use of new materials the average weight of a racket has reduced significantly over the years and this trend will probably continue. However, as a general rule:

As you’d expect, a heavy racket in general means more power but less manoeuvrability and vice versa with a light racket. But extra weight also mean more stability, so in theory you can hit the ball harder and still control the racket. Therefore you’ll tend to find advanced players will look for a heavier racket and beginners will opt for something lighter.

Unless you specifically know what you want or someone with experience has told you, go a a 16/19 string pattern in a racket or as close as possible to that. If you consider yourself a big spinner of the ball go for 16/19 or less like 16/18 and if oyu hit the ball hard and flat then try something with more strings such as 18/20

More wight in the head of the weight will mean more velocity in your swing when the ball connects so more power in your shits. And similarly a head light racket will have less power but offer you more control.

As you’d expect, a head heavy racket in general means more power but less manoeuvrability and vice versa with a light racket. But extra head weight also mean more stability, so in theory you can hit the ball harder and still control the racket. Therefore you’ll tend to find advanced players will look for a head heavy racket and beginners will opt for something with a lighter head.

But please note that there are plenty of beginners who want extra power so they plump for a head heavy racket.

Modern tennis rackets aren’t all straight if you look at their frame. Often the width differs as you go along the frame. The 3 measurements for the beam will show you if the frame stays straight or goes in our out as you move along the frame.

In general a wider beam width means a more powerful racket as their is more material in the racket therefore giving you more strength when you contact the ball.

Measured in inches (in) or centimetres (cm) or millimetres (mm)

The variance in the length of a tennis racket hasn’t really changed over the years apart from a short trend towards extra long rackets. This means that nearly all rackets are 27 inches in length

If you do find a racket that isn’t this length then we would suggest that a longer racket will create higher swing velocity and therefore a more powerful shot, but will be harder to control. Therefore a player looking for help with their power of hitting might like a longer frame (if oyu can find one that is)

Racket manufacturers will always recommend the tension range that you should use when stringing their rackets. Often oyu will have bought a racket with strings already in it so you don;t need to worry about this. but if oyu have bought just the frame or if you restring a racket then you might want to pay attention to the manufacturers recommend tension.

However, a lot of players have their own preference in terms of string tension so will ignore this manufacturers advice. If you did string a racket outside of their recommended tension and it broke then they might refuse to replace it but we’ve never heard of that happening.

Click here to buy tennis rackets, balls, clothes, strings and shoes with a 5% DISCOUNT on the lowest internet price PLUS a free string upgrade (worth £30) from our trusted retail partner All Things Tennis