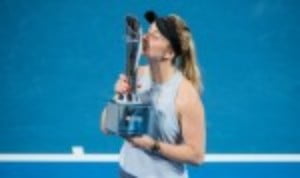 The Ukrainian, who will climb to world No.4 in the rankings on Monday, recorded an emphatic 6-2 6-1 success over Aliaksandra Sasnovich in a one-sided final at the Brisbane International.

It’s a 10th career title for Svitolina and she will head to Melbourne for the Australian Open brimming with confidence.

“It’s always amazing to start the year with a trophy and I have no words,” said the new champion, who did not face a single break-point in the championship match.

Sasnovich, the first ever qualifier to reach the final in Queensland, never settled and struggled to make an impact from the baseline. Her backhand impressed, but her forehand offered little from an attacking perspective.

“I’m sorry for my play today,” quipped the world No.88 at the trophy ceremony. “I would like to congratulate Elina, it was a great week for her and she was better than me and deserved it.”

Svitolina, in her sixth final within the last 13 months, make a bright opening to the match and established an early lead. The Ukrainian was in a commanding position and a backhand winner fizzed crosscourt helped her clinch the first set 6-2.

Sevastova's first set statistics did not make pleasant reading. She cracked 8 winners but committed 15 unforced-errors as she failed to trouble her higher-ranked rival. She desperately needed a fast start to the second set, however matters only got worse.

A backhand return winner directed crosscourt earned the No.3 seed a 2-0 lead – and she was soon closing in on victory. There was a limited response from the Belarusian, and she was simply relieved to have avoided the dreaded ‘bagel'.

It may have been an unsatisfactory ending to a dream tournament for Sasnovich, but her efforts this week will see her rise to a career-high ranking of No.53.