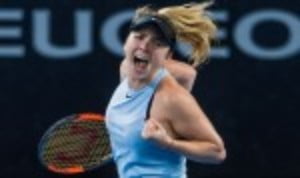 The Ukrainian’s athleticism and impressive court-coverage helped her secure just a second victory in seven meetings with the big-hitting Czech.

Pliskova was in the ascendancy in the opener, however she was unable to build on her early advantage and paid a heavy price. The second set was equally tight, but it was Svitolina who held her nerve down the stretch – despite squandering a 5-2 lead.

The Ukrainian, who will go in search of a 10th WTA title on Saturday and climb to No.4 in the rankings on Monday, was delighted to overcome a sticky start.

"I was playing very badly, I was making lots of mistakes so I just said to myself to take time, just go for your shots, but aim one metre inside the court."

Svitolina's involvement in the championship match is not unexpected, but few anticipated qualifier, Aliaksandra Sasnovich, would make it so far.

The Belarusian, ranked No.88 in the world, will have a chance to win the first title of her career after overcoming Anastasija Sevastova 7-6(3) 6-4 in the first semi-final.

The 23-year-old, who is currently positioned at a career-high placing of No.53 in the live rankings, is the first qualifier to ever reach the final in Brisbane.

"I already said at the beginning of the tournament that I couldn't even imagine that I will be in the final," said a delighted Sasnovich. "It's good for me, good for my country, good for all of the people who support me. Without them, it was not possible.

"It was a very good match, and I'm really happy to finish this match in two sets. I’m really pleased to start the season like this."

This will be the first meeting between the two finalists.

Elsewhere, Simona Halep breezed into the final of the Shenzhen Open. The Romanian, currently without a kit sponsor, conceded just five games as she dismissed compatriot, Irina-Camelia Begu, 6-1 6-4.

Some players tend to just thrive at a particular venue – and Katerina Siniakova certainly enjoys the conditions in Shenzhen. The Czech is into her second consecutive final in China’s 11th biggest city after an unexpected 6-2 3-6 6-3 triumph over Maria Sharapova.

Halep and Siniakova have met just once before, in Shenzhen 12 months ago, and it was the Czech who prevailed in three close sets.