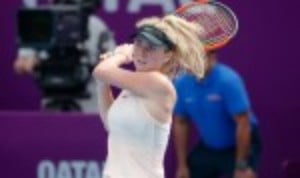 The Ukrainian was victorious at the Dubai Duty Free Tennis Championships for the second consecutive year after dismissing Daria Kasatkina 6-4 6-0 in a one-sided final.

It’s the 11th time the ever-improving 23-year-old has held silverware aloft – and she has become just the third player, joining Venus Williams and Justin Henin, to win successive titles in Dubai.

Svitolina captured a career-best five titles last year, and she has already entered the winner’s circle twice in 2018. She started the year with a bang by winning the Brisbane International in the first week of the campaign.

"It's amazing to win here again," said Svitolina. "Even being the defending champion is amazing.

"I was just trying to hit the ball onto the court and make her run today. At the end I'm very happy with how I played and with this whole week."

Kasatkina had an eventful and arduous week – saving multiple match-points against Johanna Konta and Garbine Muguruza en route to the final – and she was understandably proud of her efforts in the Middle East.

The Russian will take her place in the Top 20 of the WTA rankings for the first time on Monday, just reward for her steady progress.

“It was tough,” admitted Kasatkina as she reflected on her display in the championship match. “I think Elina was the toughest possible opponent for this final.”