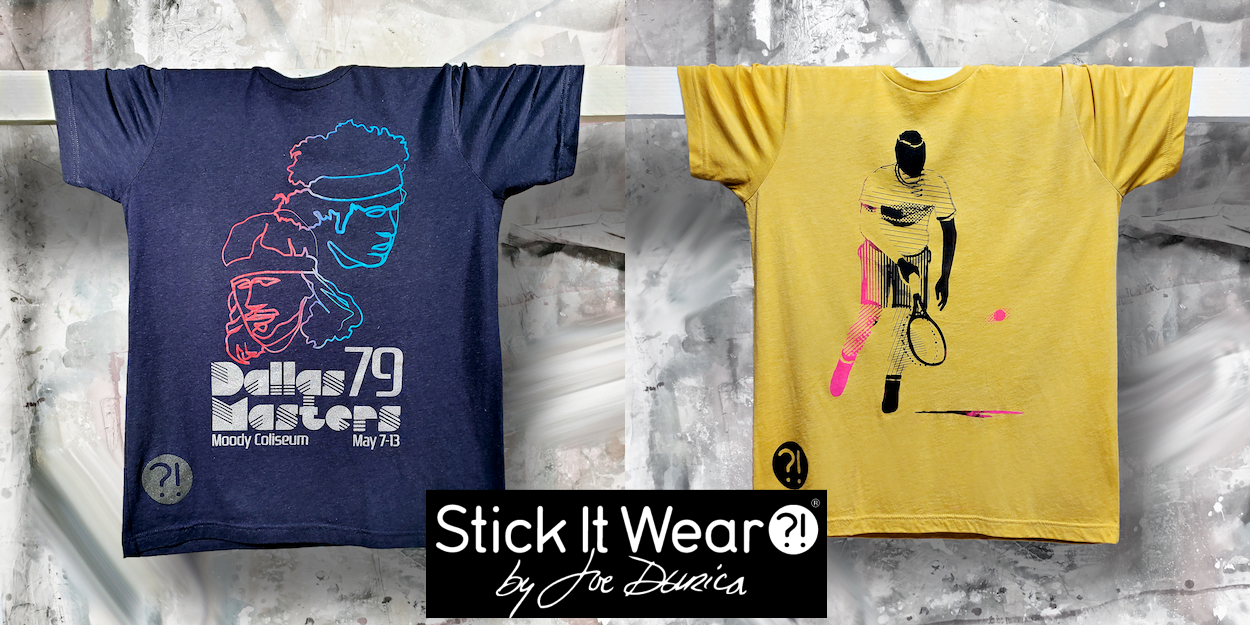 These stylish Stick It Wear?! tennis t-shirts were born from a love of the ‘momentary celebration’ that the designer experienced when growing up in sports-mad Chicago.

Long gone are the times when tennis t-shirts were just for the courts and now when you look at a busy tennis club mix-in you’ll see all manor of brands and styles on show. Tennis players want to look good on court and off it and sports clothing can be seen as much in restaurants & bars as on the sporting stage.

The founder of Stick It Wear?!, Joe Durica, grew up in Chicago during the 1970’s & 80’s when the city entered a creative boon thanks to the advent of House music. Then came those long hot summers with Michael Jordan bringing home 6 NBA basketball titles for his famous Chicago Bulls team.

Joe noticed that procedural victories had lasting effects of enhancing the esteem of the city and its fans. That is where he understood the influence of sports. The brand’s bread-and-butter shirts are adorned with stick characters or ‘smart figures’ that are directly inspired from the refined Olympic pictograms of the 70’s and 80’s.

Tennishead stumbled across his website that sells a range of tennis T-Shirts and tops linked to all the major USA sports but with a very decent range of tennis focussed styles. We contacted Joe who kindly sent us some samples to try out.

The ‘vintage tourney’ t-shirts focus on bringing the past back to life. For example, the Dallas Masters shirts is a ‘faux tournament’ recreation of a popular shirt they may have missed in by gone days. A shirt featuring the wood, the guts and the hair of their favorite free flowing players. This Stick It Wear?! t-shirt takes inspiration from the immediately recognisable faces of those two iconic players combined with a funky ‘disco’ font.

The quality of shirt is great and could easily be worn as a casual top with jeans or for a friendly match at your local club.

Joe also produces t-shirts using a more ‘performance’ focussed fabric and these shirts feature the stick features more artistic interpretations of popular player movements that you will instantly recognise. Although the characters are never revealed in this fun game of ‘guess who?’, we love his depiction of Federer playing a backhand, Kyrgios showing off his tweener and Nadal pounding a forehand with that unmistakable follow through round his head. These performance shirts are made from 100% polyester which deals well with sweat.

Stick It Wear?! also offers a nice range of bright and colourful sweaters that will be perfect for when you are warming up or braving the elements of a colder day on the courts.

When we spoke with Joe Durica about the inspiration behind his Stick It Wear?! designs he said to us, “The subtle and suggestive use of the figures evokes an elegance that translates into simple, witty and endearing images. They simplify our memories as we pass them from generation to generation of sports enthusiasts. In the process of turning a hero into a ‘icon’, the brand announces the arrival of the sophisticated die hard. It is the smart fan’s smart shirt.”

Stick It Wear?! T-Shirts can be purchased online at StickItWear.com and prices start at $36 + shipping. Tennishead customers can benefit from a 10% discount when using coupon code: TENNISHEAD10 at the checkout