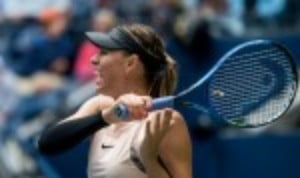 The Russian, who missed last year’s edition of the ‘Happy Slam’ due to a doping violation, was greeted by rapturous applause as she made her way on to Margaret Court Arena for her first round match.

On the tenth anniversary of her only win at Melbourne Park, Sharapova made the ideal start  – despite her level of play fluctuating throughout the 78-minute contest. The 30-year-old hit more unforced-errors than winners, and was erratic from the baseline at times.

“It’s been a couple of years since I’ve been out here so I wanted to enjoy the moment,” said Sharapova. ‘It was really meaningful for me to be out here today and I was just happy to get it done in two sets.

“Just like everyone in the draw here, I know it’s only going to get tougher with every match I play. It’s only tougher opponents moving forward."

If the No.14 seed, Anastasija Sevastova, wins her first round match against Varvara Lepchenko, she will encounter Sharapova on Thursday. The Latvian prevailed in her previous meeting with the Russian in Beijing last October.

“I believe I could have a tough one in the next round against someone [Sevastova} who I’ve had a lot of trouble against in the last few months. It’s a challenge, but that’s why this is called a Grand Slam, and that’s why it’s so meaningful when you are the last one holding the trophy.”

Another former champion enjoyed the sweet taste of victory. Angelique Kerber downed her compatriot, Anna-Lena Friedsam, 6-0 6-4. The former world No.1 was the dominant force in the opener but she encountered turbulence in a fiercely contest second set.

“I started really well and I was really feeling the ball from beginning," explained the 29-year-old. "Anna-Lena played better and better, especially at the end of the match, and she was fighting until the last point. That’s why she is so dangerous.”

Kerber endured a dismal campaign last year, and she is not keen to dwell on the past. “I’ve said goodbye to 2017 already,” added the German, who won the Sydney International on Saturday.

“I’m not looking back, and I’m just happy that a new season had started and I’m feeling good.”

Elsewhere on the grounds, Karolina Pliskova notched a comfortable 6-3 6-4 win over Verónica Cepede Royg to start her campaign on the right note.