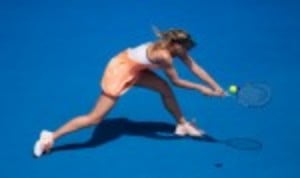 The unseeded Russian, who lifted the title a decade ago, will tackle the 30-year-old German in her opening round match as she attempts to navigate the toughest section of the draw.

If Sharapova overcomes her first obstacle, she will likely face No.14 seed, Anastasija Sevastova, in the second round. Angelique Kerber is a possible last 32 opponent and Garbine Muguruza could be waiting in the fourth round.

Johanna Konta, in the same half of the draw as the Russian, will launch her latest bid for Grand Slam glory against Madison Brengle. If the British No.1 avoids trouble in the first week, she could encounter No.6 seed, Karolina Pliskova, in the last sixteen.

The big-serving Czech will start against Verónica Cepede Royg and could meet her compatriot, Lucie ŠafáÈová, in the third round.

The player that survives the challenging second section is projected to meet world No.1, Simona Halep, in the last eight. The Romanian will begin against wildcard entry, Destanee Gabriella Aiava, and could be tested by Petra Kvitova in the round of 32.

In the bottom section of the draw, Caroline Wozniacki, fresh from reaching the final of the Auckland Classic, will take on Mihaela BuzóÛrnescu in her first match.

The No.2 seed, who reached the semi-finals in Melbourne seven years ago, could meet either Jelena Ostapenko or Coco Vandeweghe in the last eight.

Elena Svitolina, a possible last four opponent for the Dane, will hope to continue her fine form at the first major of the year after easing to the Brisbane International title last week.

The Ukrainian will look to make an incident-free start against a qualifier and it’s possible she could encounter Sloane Stephens in the last sixteen.

Venus Williams is the favourite to emerge from her quarter and reach the last eight, however she must survive a demanding first round tie against the on-form Belinda Bencic before even contemplating another deep run.

Other first round clashes of intrigue include Dominika Cibulková versus Kaia Kanepi and Kristina Mladenovic against Ana Bogdan.

The 106th edition of the Australian Open begins on Monday. The full draw is available here.