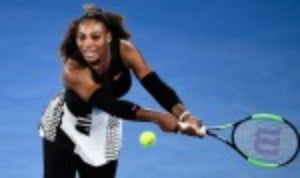 It was the former world No.1’s first outing since becoming a mother four months ago and she put in an encouraging performance – despite losing the match.

Ostapenko enjoyed a confidence-boosting 6-2 3-6 (10-5) win against her idol before heading to China for next week’s Shenzhen Open. The French Open champion will begin her WTA season against Kristyna Pliskova.

Williams was shaky in the early exchanges and looked uneasy with her movement. She improved considerably in the second set, though, and performed much better than anticipated.

"First matches back are always super incredibly hard, especially after having a baby, but it was great,” said the 23-time major winner, in her post-match interview on Eurosport.

“Motherhood is phenomenal. I was a little worried out there and looking at my camp and wondering if Olympia is okay [her daughter], but it’s really good and I’m excited to be back on the court. It was such a good time for me.”

Williams had not yet decided if she will defend her Australian Open title next month in Melbourne.

In other news, Novak Djokovic has pulled out of next week’s Qatar Open in Doha. The 30-year-old was expected to defend the title he picked up 12 months ago, however further elbow trouble means he remains on the sidelines.

The Serbian was due to play Roberto Bautista Agut at the Mubadala World Tennis Championship in Abu Dhabi on Friday, but did not feel fit enough to compete.

“Unfortunately the situation with the elbow has not changed for better since yesterday,” explained Djokovic on his Twitter account. "I still feel pain. Therefore, I will have to withdraw from ATP tournament in Doha.”

The Serbian, who has not played since Wimbledon, is now a serious doubt for the first Grand Slam of the year.