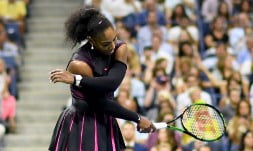 For the second year in a row, Williams will be conspicuous by her absence at in Singapore after pulling out of the season finale, where she is a five-time champion.

“I was looking forward to competing in Singapore this year and playing against the best players in the world,” she said.

“However I have received disappointing news from my doctor that I must undergo a series of medical treatments for my shoulder, and will be off the court for the next several weeks.

“I will miss coming to Singapore for the year-end finals and playing in front of my fans but truly hope to be back soon.”

Williams skipped the Asian swing last year after the heartbreak at missing out on a calendar year Grand Slam at the 2015 US Open. The American was two wins away from equalling Steffi Graf’s tally of 22 major titles and the first player (male or female) since Graf in 1988 to win all four Grand Slams in a single season.

However, after her shock defeat to Roberta Vinci in the semi-finals at Flushing Meadows, Williams did not play again in 2015.

Williams also fell in the semi-finals at the US Open this year, losing to Karolina Pliskova in the last four as she chased a record 23rd Grand Slam title.

Angelique Kerber is the top seed in Singapore and Williams’ absence means the German is guaranteed to finish the season as world No.1.