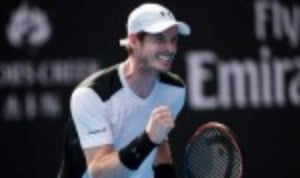 Raonic next for Murray in Melbourne

“It was a pretty physical match,” said Murray, who will face Milos Raonic in the semi-finals. “I wasn’t prepared for it to be that hot. At the end of the second set especially there were a lot of long rallies, long games and physically it was tiring.”

Ferrer was the only man to reach the quarter-finals without dropping a set, but that soon changed when Murray took the opener in 45 minutes.

Despite Murray fighting back from 4-1 down he lost the second set on a tiebreak, but after a brief delay to shut the roof, Murray soon forged ahead once again. A break in the sixth game of the fourth set proved the key for Murray as he wrapped up victory after three hours and 20 minutes.

“I think I played well today,” said Murray, who served 11 aces and eight double faults. “I think it was probably the best match I played, especially in the second and third set. I started hitting the ball better from the back of the court.

“Obviously last few days have been tough and maybe hadn't played my best tennis and managed to get through. Today I felt like at the end of the match I was playing some good stuff, moving well. Few things I could still do better for sure, but not easy circumstances today either with the changing of the conditions. I handled it fairly well.”

Standing between Murray and a fifth Australian Open final will be Milos Raonic, who became the first Canadian to reach the men’s singles semi-finals in Melbourne with a 6-3 3-6 6-3 6-4 victory over Gael Monfils.

Raonic, who reached the semi-finals at Wimbledon in 2014, is seeded No.13 after dropping out of the top 10 last season following foot surgery. The 6'5" right-hander, who upset former champion Stan Wawrinka in the fourth round, has enjoyed an impressive start to the year, beat Roger Federer to win the Brisbane International.

Murray won their only previous encounter at a Grand Slam in straight sets, en route to winning his first major at the US Open in 2012, but Raonic has won three of six meetings against the Scot.

"It's been a very good start to the year," said Murray of his semi-final opponent. "We're only a couple of tournaments in and it's a long, long year. He was unfortunatel last year with some injuries. He had a few physical issues. I played him in Madrid and he was struggling a little bit there. He's obviously fit and healthy now and playing well."