Rafa Nadal is only just behind Pete Sampras and crushed both Federer and Djokovic in terms of his win percentage over Top 10 players during a Grand slam. Sampras leads the ranking with a 72.% win ration but Nadal is a close second with 71.2% before a big gap to Federer (65.3%) and Djokovic (64.9%) 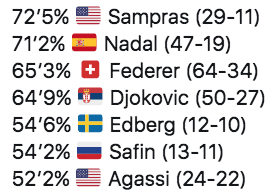 This statistic is so crucial because it’s a very good measure of a players effectiveness during the later stages of the biggest tournaments. Nadal is obviously the ‘King of Clay’ and so a high proportion of these results will have come on a surface and at a tournament where he’s been virtually unbeatable for the past 12 years.

Pete Sampras won Wimbledon 7 times during an 8 year spell when he was totally dominant on that surface. A lot of his dominance was no doubt down to the fact that his serving was the best in the world and the Wimbledon condition were extremely quick during that period.

Rafa Nadal has proven that he can win on all surfaces by taking his 4th US Open title this decade when he beat Daniil Medvedev in a 5 set thriller to win the 2019 US Open men’s singles. Nadal’s incredibly intense concentration and refusal to give in will be a major factor behind his win ratio against Top 10 players.