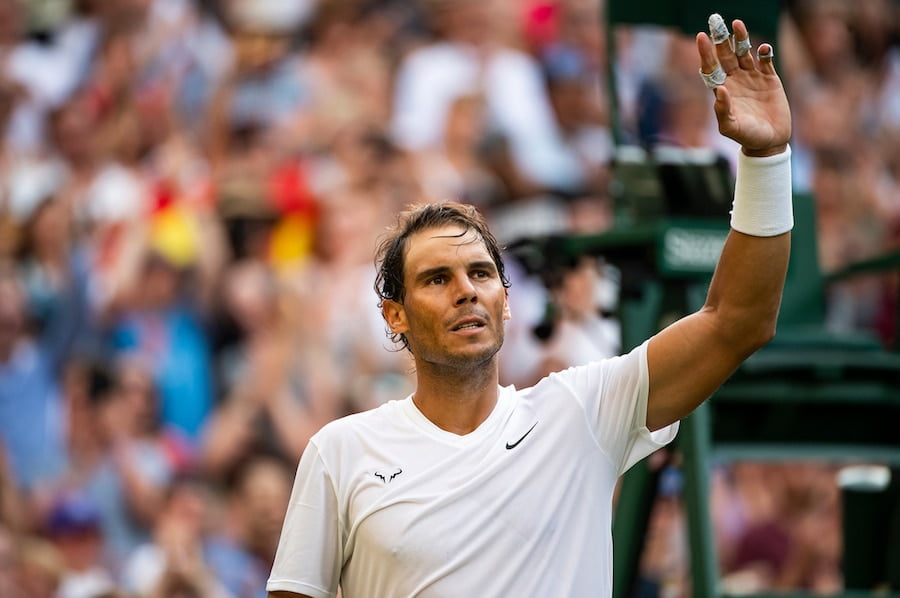 The man from Mallorca, Rafa Nadal, made an intense start to the contest, and broke the French serve early on in the first set. At break point a rather flat Tsonga hit a forehand down the line wide causing him to fall 3-1 behind to the two time champion.

Nadal kept up the ferocious start and confidently held serve throughout. A Tsonga double fault followed by a ripping cross court forehand winner from the Rafa Nadal racket sealed the set at 6-2.

Looking to make his first Grand Slam fourth round for two and a half years, Tsonga continued his poor performance at the beginning of the second set. Despite holding onto his first two service games, the former world number 5 gave Nadal an early 4-2 lead.

The man from Le Mans did manage to save two set points on serve in the second, but the 12 time French Open champion confidentiality closed the set 6-3 to bring him within touching distance of a 45th fourth round at a Slam, and ninth at Wimbledon.

A win for Tsonga would have put him sole fifth in the all time wins against Nadal list, ahead of players like Tomas Berdych, Lleyton Hewitt and Dominic Thiem who he is currently tied with on four. This however was looking unlikely against the 18 time Grand Slam champion.

The 72nd ranked Frenchman recorded his best ever Wimbledon result from two sets down when he came back to beat Federer in 2011 quarter finals. Tsonga however was unable to provide  a performance anywhere near repeat of eight years ago. Looking fairly resigned to losing he hit back to back forehand errors that allowed Nadal to take an early break and a 2-1 lead in the third.

Nadal is two behind Federer in total Grand Slam victories and looks to close that to one next week. A double fault from his opponent helped him to take a 4-1 lead in the third set.

Tsonga impressively saved three match points on serve at 5-1 down, positively engaging the crowd with some humour. But Nadal confidentiality held serve to end the match. He will play either Britain’s Dan Evans or Portuguese Joao Sousa, who are both looking to make the last 16 for the first time at SW19.