Preview of the Citi Open in Washington from July 27th to August 4th, 2019

The Citi Open in Washington is an ATP 500 event that forms part of the US Open Series, a group of tournaments leading up to the final Grand Slam of the year in New York. This hard court event has been won by a host of tennis legends over the years plus some of tennis’s biggest names including Alexander Zverev and Juan Martin del Potro.

The Citi Open in Washington was first held in 1969 and played on clay courts until 1986 when it moved to the current hard courts. There is a men’s and ladies event at Washington however the ladies event is much smaller in terms of prize money and world ranking points than the mens so it doesn’t tend to attract the biggest names.

The tournament has always featured some of the greatest names in men’s tennis and the winners list includes such legends as Ivan Lendl, Andre Agassi, Michael Chang, Stefan Edberg and Andy Roddick. The 2019 entry list lives up to this billing with Stefanos Tsitsipas, Karon Khachanov, Kei Nishikori and Nick Kyrgios already entered.

What is the prize money and how many ranking points are available?

The mens tournament is an ATP 500 which means that the winner receives 500 ATP World Ranking points, with the complete breakdown of points and prize money awarded as follows:

Who is the reigning Champion?

You can buy tickets online by clicking here 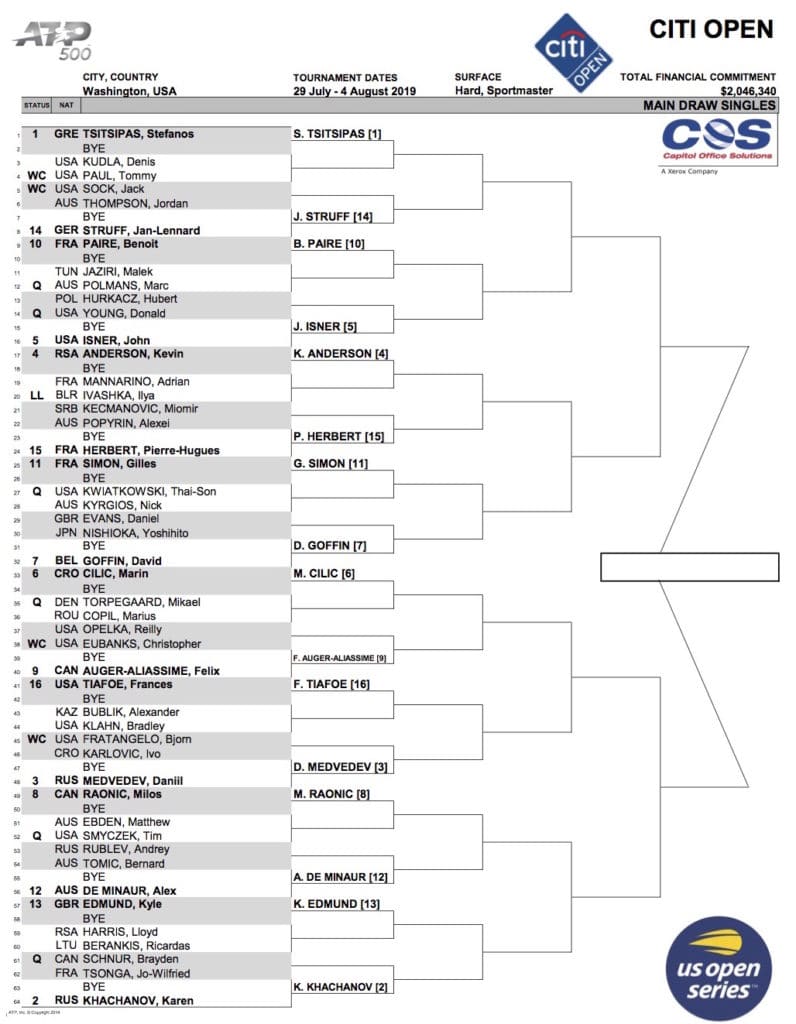 Preview and prediction for 2019

Intriguingly the organisers have been trying to raise the profile of the doubles event this year with recent announcements that Andy Murray will play as well as Nick Kyrgios in the doubles.

Looking at the singles draw the big surprise is that Alexander Zverev hasn’t yet entered so it seems he won’t try and defend the title he’s won for the past two years.

This leaves young Greek star Stefanos Tsitsipas as the top seed in a draw that will also feature Kei Nishikori, Kevin Anderson and Karon Khachanov.

Nome of these players is in what you’d call ‘top form’ so Tsitsipas must fancy his chances of raising the trophy here.

Nishikori is probably his biggest threat as the Japanese superstar has a fantastic record on American hard courts and has been showing some strong form so far this year culminating in a run to the quarter finals of Wimbledon.

Other notable players to watch out for are Milos Raonic, Daniil Medvedev, John Isner and of course the one and only Nick Kyrgios.

Raonic is starting to build his game after a long injury timeout, Medvedev has shown great consistency to earn a place in the world’s top 10 for the first time, Isner is coming off a win at the ‘Hall of Fame’ tournament and Kyrgios showed glimpses of his best play in losing to Nadal at Wimbledon in a close fought 4 set contest.