Preview of the BNP Paribas Open from Indian Wells, California, USA from 7th to 17th March, 2019

The BNP Paribas Open ATP & WTA joint tournament is often called the ‘5th major’ and is one of the biggest tournaments of the year, running over 10 days and featuring the very best men & women players in the World

Owned and organised since 2009 by technology billionaire Larry Ellison, the tournament is portrayed as being a ‘Tennis Paradise’ and if you’ve ever seen the venue and experienced the event then there will be few people who would disagree.

The tournament itself has actually been played since 1974 when it was called the American Airlines Tennis Games. Now it is the most attended tournament in the world outside of the Grand Slams and runs for 10 days featuring an ATP 1000 tournament and a WTA tournament running consecutively.

What is the prize money and how many ranking points are available?

The mens tournament is an ATP 1000 which means that the winner receives 1,000 ATP World Ranking points, with the complete breakdown of points and prize money awarded as follows:

The women’s tournament is a WTA Premier Mandatory event which means that the winner receives 1000 WTA Ranking points, with the complete breakdown of points and prize money awarded as follows:

Who are the reigning Champions?

You can buy tickets online by clicking here 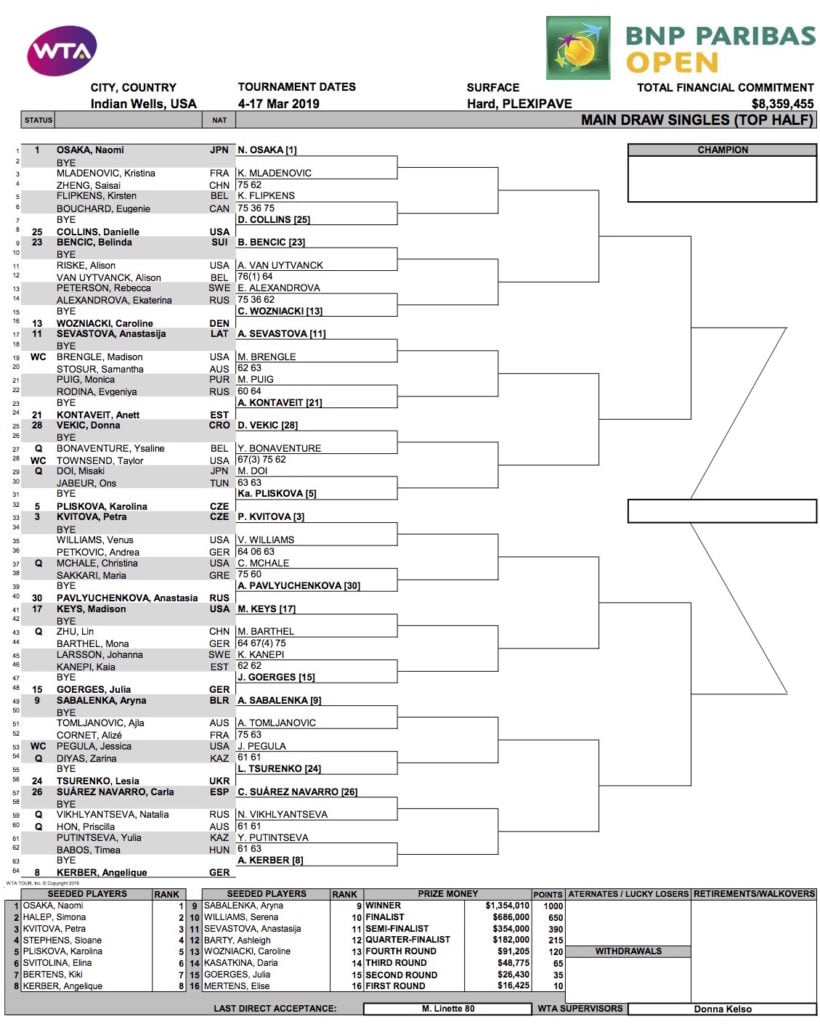 this event always produces great champions and 2018 was no different seeing Juan Martin del Potro score probably his biggest victory since winning the US Open. The draw was missing both Rafa Nadal and Novak Djokovic whereas the 2019 entries already include those two huge players.

The conditions in California are always said to be much quicker and higher bouncing than a lot of other tournaments. This would tend to favour a player like Nadal with his huge spin and double handed backhand, and if fit he would definitely be one of the top favourites for this year’s tournament.

Djokovic has enjoyed huge success over the years at this event, like nearly every other tournament around the world, so no-one would ever write him off. His performances at the Australian Open this year were outstanding so if he can bring that form to Indian Wells he will be the favourite and our prediction for the winner.

Other players to watch out for with potential to cause an upset and reach the later stages are Stefanos Tsitsipas and Alexander Zverev. Both young players that love fast conditions and hard courts and with a point to prove in these massive tournaments.

Good luck to everyone!