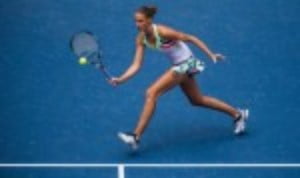 In the last meeting between the pair in Sydney two years ago, the Czech overcame the American without conceding a game however it was a much closer affair on this occasion.

Gibbs may be ranked 126 places behind Pliskova, but she was the dominant force in the early stages. It was a first set to forget for the Czech and she fell a double-break behind after committing a hat-trick of double-faults in one game.

The fiery American pocketed the opener for the concession of two games and an unlikely upset suddenly appeared possible. The 24-year-old stayed with her imposing rival in the second set but a miscued forehand in the eighth handed the Czech a break and a 5-3 advantage.

It was a significant breakthrough for Pliskova and she soon pulled level at one set apiece. The decider was fiercely competitive however the extra firepower of the Czech proved to be the telling difference.

“I think in the second set I improved a little bit,” said the world No.1. “I started to serve much better and I hit some aces and got some free points, which was much needed. I think she was playing really aggressive from the baseline and I didn’t have many chances to play my game, but I’m just happy I closed it out with my serve.

“It’s easier for them to play me, that it is for me to play them. I feel the pressure so I just wanted to win. I know I have a good draw so obviously everyone is playing their best tennis against me, and I felt that today.”

Elina Svitolina strolled into the last 32 for a third consecutive year after a comprehensive 6-4 6-4 success over Evgeniya Rodina.

It was a low key contest played in front of a sparse crowd, but the Ukrainian did what was necessary to see off the Russian.

“I have no expectations for myself. I just try to go out there and enjoy each match and play my game,” said the No.4 seed after her her win.

“Of course the chance to reach No.1 is a massive deal to any player, but I really want to go far in the tournament and take it one match at a time.”

Madison Keys was also a winner on day four as she overpowered Tatjana Maria 6-3 6-4 in windy conditions.

"I'm really happy with today," remarked the American No.3 with a grin. "I think after being broken right away, I regrouped and played some good tennis after that, so that's what I'm most pleased about."

Elsewhere on the grounds, Naomi Osaka maintained her excellent form as she edged out Denisa Allertova 6-3 4-6 7-5. The teenager, who took out the defending champion Angelique Kerber in the opening round, now has an opportunity to reach the last sixteen of a Grand Slam for the first time.