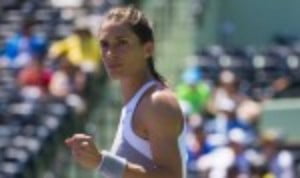 Petkovic back on track after ‘midlife crisis’

A 6-0 6-0 defeat to Carla Suarez Navarro in Zhuhai was a disappointing end to the season for the German, whose mother had fallen ill while she was in Asia.

“I’m so thrilled that I made the decision to keep playing,” Petkovic told Sport360. “I think maybe that crisis actually made me work harder in the offseason because I really wanted to make up for the lost time.”

“Actually Jimmy Page from Led Zeppelin, he actually quit playing guitar when he was 28 exactly for a year before he came back and became a huge star, obviously. For me, that was maybe not the thing that I could identify most with but that made me realise most that it was just a crisis, because if you don’t want to be a rock star, what else in life do you want to be?