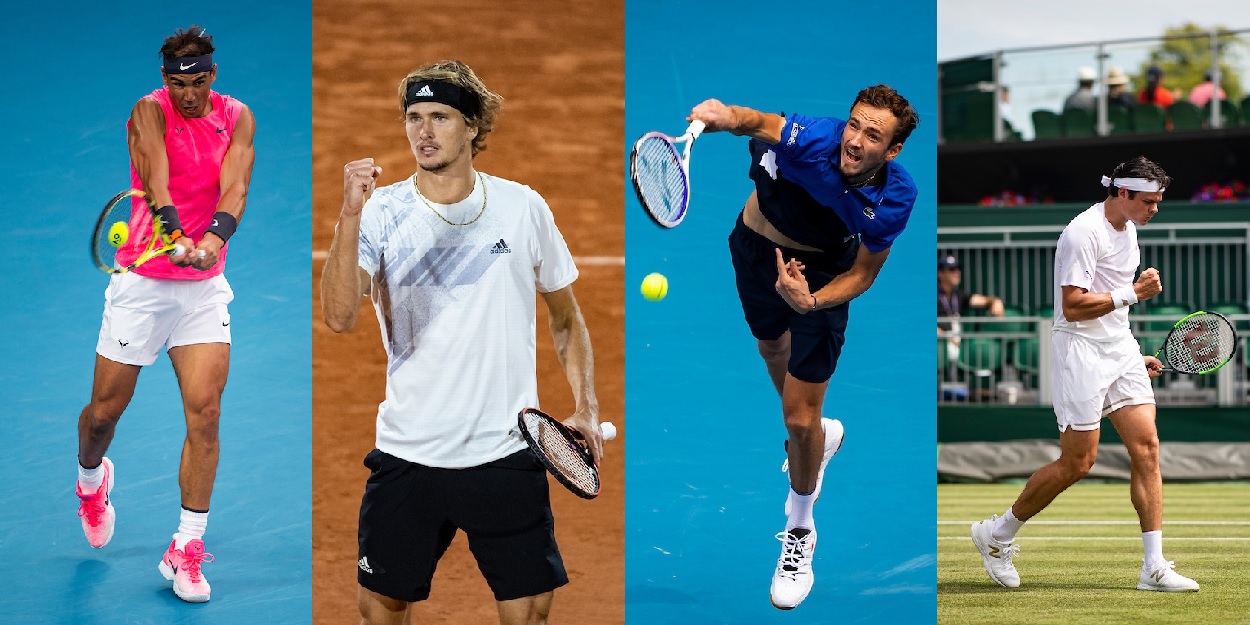 The semi-finals are set in Paris for the final Masters 1000 event of the year. It is also only the third of the year and, as Novak Djokovic won the other two (Cincinnati and Rome), all four men are looking for their first of the year, and for one of them, a first of their career.

Three of the top four seeds are in action but Paris has sprung more than a few surprises over the years with Karen Khachanov and Jack Sock among its recent champions. Who is most likely to reach this year’s final on Sunday? Let’s take a look.

Nadal is playing in his first tournament since winning a record-extending 13th French Open title, and his first hardcourt tournament since the Mexican Open (which he won) back in February. He began his week with a close-fought match against his friend and countryman, Feliciano Lopez, and the win marked his 1,000th at tour level. Only Lendl, Federer, and Connors have more. Win 1,001 came a little more easily against Australia’s Jordan Thompson, but Nadal was again pushed hard by Pablo Carreno Busta in the quarter-finals, who was the better play for the first set and three quarters. Nadal has found that extra gear when he has need it most this week, but he is yet to impress in a match from start to finish.

Zverev, meanwhile, came into Paris having achieved back-to-back title runs in Cologne. He began strongly with a commanding win over Miomir Kecmanovic, before being pushed to the limit by Adrian Mannarino. Zverev hit an impressive 87% of first serves in against the Frenchman and won 73% of those points, but he only won 43% of his second serve points, making for a long and difficult evening. Stan Wawrinka came into their quarter-final match after lengthy wins over Tommy Paul and Andrey Rublev, and the 35-year-old looked a little lethargic as he fell to the German in straight sets, in spite of having the opportunity to serve for the second.

Nadal and Zverev have played six times before with the Spaniard leading 5-1. Zverev, however, won their most recent encounter, 6-2 6-4, on indoor hardcourts at last year’s ATP Finals. Neither man has been at their absolute best this week and yet both have won titles in recent weeks and will be feeling confident.

For both men this title would be a significant prize. Paris is one of just two Masters 1000 events that Nadal has never won (also Miami), whilst Zverev has not won an event at this level since Madrid in 2018; two and a half years ago. If Nadal has another slow start then Zverev may not let him off the hook, but Nadal, after 1,000 wins, knows better than to start slow against a player of Zverev’s calibre.

Last year, Daniil Medvedev was the star of the late summer, reaching the finals of six consecutive tournaments and winning three of them. During that run he won 29 out of 32 matches played. Heading into Paris this year, he had played just another 32 matches in the near twelve months since, and had won a mere 18. He reached the semi-finals at this year’s US Open, but that run aside, 2020 had been a disappointing year for the Russian.

He began this week with a walkover win courtesy of Kevin Anderson, and then started slowly against Alex de Minaur before eventually racing through the second and third sets. He backed that up with one of his most impressive wins of the season, dismantling one of the tour’s most in-form players, Diego Schwartzman, in the quarter-finals.

Milos Raonic has had a solid if unspectacular 2020, highlighted by a run to the final of the Cincinnati Masters, where he won the first set 6-1 against Novak Djokovic before falling in three. The Canadian is the only one of the four semi-finalists not to have received a first-round bye but he also did what none of the others could by winning his first three matches in straight sets. In the quarter-finals he met the recent European Open champion, Ugo Humbert, and was given his first real test, but he edged through, coming from behind in the decisive tie-break.

Medvedev and Raonic have met twice before, with the Russian winning on both occasions. Their most recent match, however, was almost two years ago, in Brisbane, and was very close. Based on their performances so far this week, Medvedev has to be the favourite, if only for the way he breezed past Schwartzman. The world number five has not reached a final since Shanghai last year, however, and if things get tight then he may struggle for belief.