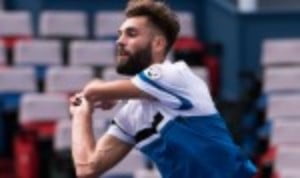 The Frenchman overcame Nikoloz Basilashvili 6-1 7-6(5) in 60 minutes to reach his first championship match in two years.

Gojowczyk, ranked No.95 in the world, reached the first final of his 11-year career after his semi-final opponent, Mischa Zverev, retired after just one game in the second set.

Zverev, who had conceded the opening set by six games to three, was forced to quit with an injury.

At the ATP 250 event in St. Petersburg, Damir Dzumhur made it through to his second final of the season after a 6-3 7-5 success over Jan-Lennard Struff.

"It was a great day for me," said the Bosnian after reaching the final. "I played from the start until the end at a high level. I think I took my chances. Today was one of the best matches of the past few months for me.”

Fabio Fognini emerged the victor from the second semi-final. The Italian took out top seed, Roberto Bautista Agut, 2-6 7-6(7) 7-6(5), in a closely contested duel.

In the second day of action at the Laver Cup in Prague, Europe strengthened their advantage over the Rest of the World by winning three of the four matches.

Roger Federer enjoyed a straightforward victory over Sam Querrey and Rafael Nadal denied Jack Sock in a champions’ tiebreak to give his team a commanding 7-1 lead at the close of the afternoon session.

In the evening session, Nick Kyrgios reduced the arrears for Team World as he downed Tomas Berdych before Nadal and Federer combined to defeat Sock and Querrey in the doubles to ensure Europe holds a 9-3 lead heading into the final day.

Federer’s first outing since his loss to Juan Martin del Potro at the quarter-final stage of the US Open went without a hitch.

"I’m happy with how I’m feeling," remarked the Swiss. “You know the break was badly needed after the US Open because the back was one of the issues I had. I was eventually able to get rid of other things (niggling injuries) so I’m very happy with today.

“If it was a disguise or not, I’m not sure, but I was happy with my level of play. I served well, moved well, the reactions were there and the energy was there. Of course it’s easier when you look over to the bench and you see a bunch of superstars telling you: ‘you’ve got to win this point right now. Let’s do this, Roger.’

Despite not performing at his best, Nadal squeezed past his gutsy American opponent to earn his side two vital points.

The world No.1 appeared to be in complete control as he moved a set and a break in front, but Sock, encouraged by a stern pep talk from John McEnroe, began to dominate proceedings with his forehand.

Sock, who turns 25 tomorrow, unnerved his opponent with his aggressive approach and he managed to force a decider. The American trailed for the majority of the champions’ tiebreak though, and he lost it by eleven points to nine.

Kyrgios made a slow start to the contest as he struggled with his knees however he soon embraced the challenge and began to make progress.

The Australian claimed the second set to force a champions’ tiebreak and a couple of untimely double-faults from the home favourite gifted his rival an important victory.

The eagerly anticipated collaboration between two of the greatest players to ever pick up a racket finally took place this evening.

Nadal and Federer, with a combined 35 Grand Slam singles titles between them, joined forces to take out a high quality American partnership. The world No.1 and 2 were under the cosh in the second set but they regrouped in the champions’ tiebreak and showed their renowned quality in the crunch.

“I was really focused before this doubles match,” said Federer, who appeared to enjoy his time on court with his great rival. “I didn’t want to miss the start and be the one to blame so I’m very happy with how we played – it was so much fun.

“Just the preparation with Rafa, going through the motions, talking tactics and talking about which side to play on. All these different things are very special and I’m happy that the one match we did play so far we did win in our careers.”

“It was good fun,” added Nadal. “It was the first time we had played together as everybody knows and it’s tough to know what positions to take when you play with someone new. At the same time, it was unbelievable and I enjoyed the preparations a lot and the energy on court.”