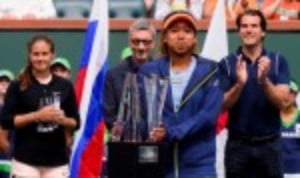 Osaka is the first Japanese woman to triumph in Indian Wells and she will climb to a career-high ranking of No.22 on Monday.

It’s been a dream few days for the new champion. She thumped the reigning world No.1 Simona Halep in the last four on Friday and was equally destructive in the 70-minute final.

It was an eagerly anticipated match-up between two youngsters destined to reach the upper echelons of the sport, however the close contested anticipated never materialised.

Both finalists represent the new wave of talent emerging in the women’s game – and the future appears bright. Osaka, the more assertive performer, took time to settle, but once she found her rhythm, the outcome was rarely in doubt.

In the eighth game of the opener, Kasatkina’s forehand, her signature shot, began to leak errors.  It proved to be a costly passage of play for the Russian as her opponent nailed a backhand winner down the line to move 5-3 ahead.

Osaka had moved clear on the scoreboard, and a quick service hold enabled her to take the all-important first set. The Japanese is unbeaten this year after collecting the opening stanza and it soon became apparent why.

Having established the lead, Osaka improved further in the second set. Her ability to club winners from all areas of the court helped her dominate her floundering rival, who continued to struggle with her range.

Kasatkina’s challenge fizzled out in the second set. She dropped serve in the first game after a double-fault and never rediscovered her composure.

It was a disappointing end to a fine tournament for the Russian, however her recent endeavours will see her rise to a career-high ranking of No.11.

It was not Kasatkina afternoon, but she will have many more opportunities to enter the winner’s circle in the weeks, months and years ahead.