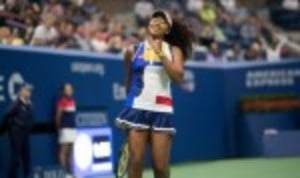 It was a dazzling display from the explosive teenager, and she claimed the biggest win of her blossoming career with unerring ease. It’s also her first ever victory over a Top 10 opponent and she has the firepower necessary to compete at the forefront of the sport in the coming years.

Osaka may have impressed with her shotmaking exploits, but Kerber was wretched from the outset. Her famed consistency was absent for the duration of the duel and she looked devoid of confidence.

The German, who will slip outside the Top 10 in the rankings after the US Open, has endured a torrid campaign and she has much to ponder in the days and weeks ahead.

“It means a lot, especially after the last time I was here,” said Osaka, who squandered a sizeable third set lead to Madison Keys in 2016. “This court has not been a fond memory, but I feel I have overlapped that now.

‘When I was 4-1 up, I was thinking ‘I hope I don’t do what I did last year,’ so that helped me focus a lot. I was playing Angelique so I really had to concentrate a lot because she is really fit and gets to everything.”

Karolina Pliskova began her US Open quest with a comfortable 6-2 6-1 success over Magda Linette in Arthur Ashe Stadium.

The world No.1 was hesitant in the early stages however she improved as the contest progressed and ended the match, which was completed under the roof, with a flurry of winners.

The Czech was resolute under pressure and she will be particularly pleased to have saved nine of the ten break-points she faced.

“I felt a little bit nervous walking out on the court,” admitted Pliskova. “I have great memories from this court and I was pretty solid today. I think last year was the breakthrough for me. Winning Cincinnati and reaching the final here at the US Open gave me more belief in myself – and belief that I could also play well at Grand Slams.”

Jelena Ostapenko is also safely through to the second round after a topsy-turvy 6-2 1-6 6-1 success over Lara Arruabarrena. The contest began on an outside court, but was completed in Arthur Ashe Stadium.

With the French Open champion leading 3-1 in the decider, play was halted due to rain however the match was selected to be completed under the roof on the main court.

On the resumption, Ostapenko won 12 of 14 points to complete the job and set up a second round meeting with Sorana Cirstea – who overcame Lesley Kerkhove for the loss of just four games.

After the match, the Latvian said: “It was raining all day and we had to stop when I was 3-1 up in the third. I’m really lucky to play on this court, it’s amazing to feel the atmosphere. I just wanted to finish the match pretty well, and I think I managed to do that.”