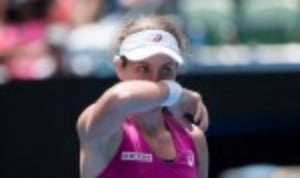 Konta, who upset No.8 seed Venus Williams in straight sets on Tuesday, will meet China’s Zheng Saisai for a place in the third round, where she could face No.30 seed Sabine Lisicki.

While Konta was the underdog against Williams, a former world No.1 and multiple Grand Slam champion, she will be the favourite against Zheng, ranked No.83 in the world.

Zheng, who is coached by Roberto Antonini and Alan Ma, is into the second round of a Grand Slam for only the second time in her career. The 21-year-old lost to Konta on their only previous meeting – in French Open qualifying in 2013.

“That was a long time ago,” said Zheng. “Last year in Wuhan she played really well. So I think will be really tough opponent.

“Konta is playing really well and if she can beat Venus that must mean something. It’s going to be a really tough match. I’ll have to fight a lot.”