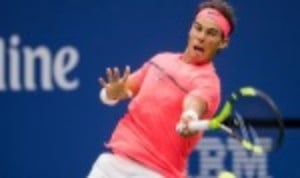 The Spaniard was under the cosh for the majority of the first half of the contest however once he converted a break-point at the 14th time of asking, the outcome was never in any serious doubt.

“I’m very happy,” said Nadal after finishing the match strongly. “It was a tough situation for me for a while. I had some break-points in the second set but I don’t know how many break-points I had before converting the first one.

“I fought a lot and was there mentally until I got the break, and from that moment I played better.”

Mayer had lost 24 of 25 previous meetings with Top 10 players but he started the match assertively. Nadal, like he has done so often throughout his trophy-laden career, directed traffic towards his opponent’s one-handed backhand – but it did not bring immediate success.

The Argentinian, who is most comfortable with red dirt beneath his shoes, was resolute behind his serve and he saved a total of six break-points en route to a first set tiebreak. The 30-year-old was the aggressor in the baseline exchanges and his positive approach was the difference in the shootout.

Few players in history are better in a crisis than Nadal, and he continued to scrap in the second set as he searched for a breakthrough. Time and again the Spaniard’s return was found wanting at critical junctures, however his perseverance was finally rewarded in the seventh game when Mayer fluffed a forehand.

It had taken 14 break-points, but Nadal had achieved the breakthrough he craved and his relief was palpable. His level improved dramatically from that moment onwards and his forehand became a dangerous weapon once again.

Mayer, who has had a trying few years with injuries, tired as the match progressed and he was unable to stay with his fearsome opponent as he dashed for the finishing line. There was a late wobble from the Spaniard in the fourth set, but he was not going to be denied his spot in the last sixteen.

Nadal’s next challenge will come from Alexandr Dolgopolov. The skillful Ukrainian delivered a shotmaking clinic as he thrashed Viktor Troicki 6-1 6-0 6-4.

Afterwards, Dolgopolov said: “I played fantastic. I played really good, it was maybe one of my best matches. I’m really happy. Even when I lost that break in the middle of the third set, I knew I could get back if I played the same way I did in the first two sets.

“I’ve had a lot of tough years, a lot of injuries, so it’s fantastic to be back winning five-setters.”

Dominic Thiem scored a routine 7-5 6-3 6-4 victory over Adrian Mannarino to maintain his interest in the competition. The unrelenting Austrian lost his serve in the first game but won four games in succession from 5-3 down to stun his crafty French opponent.

The second and third sets went relatively smoothly for Thiem and it’s the third time he has advanced to the fourth round. “It was a very good match against a tough opponent,” acknowledged the Austrian, who celebrates his 24th birthday on Sunday.

“My opponent has had a great run of form in the last month and I also played him in Cincinnati – which was also very tough. I think the key point was when I broke back for 5-5 in the first set otherwise it would have become very complicated."

Thiem’s next opponent is Juan Martin del Potro, who was outstanding in his emphatic 6-3 6-3 6-4 win over Roberto Bautista Agut.

The Argentinian, who has won all nine sets he has played so far, appears to have rediscovered his best form and his serve and forehand were lethal against his dogged Spanish rival.

“I’m so pleased to beat Bautista because he is a great player,” said del Potro. “It’s very important for me to reach the fourth round as this is a special tournament that means a lot to me. I think I played better today than in the other matches and in the next round I need to play even better if I want to win.”

The attacking-minded Andrey Rublev ensured there would be two teenagers in the last sixteen in New York. The Russian had too much firepower at his disposal for Damir Dzumhur and was a 6-4 6-4 5-7 6-4 winner.

Up next for Rublev, is David Goffin. The talented Belgian was leading Gael Monfils 7-5 5-1 when the Frenchman retired with a leg issue.

Also through to the fourth round stage is Philipp Kohlschreiber. The veteran German was rarely troubled by John Millman in his 7-5 6-2 6-4 victory.