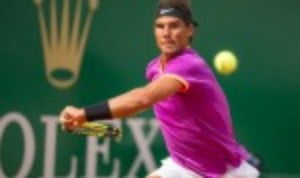 The world No.1 edged a competitive opener before storming through a one-sided second set to move within touching distance of a 76th title.

The 31-year-old has now won 34 sets in a row on clay, and he has not even been taken to a tiebreak during his impressive run. He will take on Kei Nishikori in the championship match, who defeated Alexander Zverev 3-6 6-3 6-4 to reach his fourth Masters 1000 final.

Dimitrov, bidding for his first win over Nadal on the red dirt at the fourth attempt, began the contest with belief and hope, however his demeanour changed after conceding a 60-minute opener.

The Bulgarian, not helped by a lingering shoulder issue, faded in the second set – and Nadal gleefully capitalised on his opponent’s misery.

The Spaniard had been quick out the blocks in all his previous matches on the Côte d'Azur this week, and this afternoon was no exception. He managed to ascertain a 2-0 lead with a trademark forehand winner arrowed down the line, but Dimitrov regrouped and then responded.

The Bulgarian retrieved the deficit after Nadal nudged a backhand beyond the baseline. The set was alive and kicking, and Dimitrov was very much engaged in battle as he clung onto the coattails of the ‘King of Clay.’

Serving at 4-5, Dimitrov faltered. He committed two double-faults to leave the door ajar for his opponent and Nadal needed no second invitation. The world No.1 sealed the set with a forehand winner that skipped of the side-line.

The Bulgarian has struggled with his second serve throughout the early part of the season and it was an aspect of his game that was again badly exposed under intense scrutiny.

It’s an area he will need to improve, but his immediate concern will be his shoulder. The 26-year-old appeared to be in discomfort in the closing stages and his participation at next week’s Barcelona Open must now be in doubt.