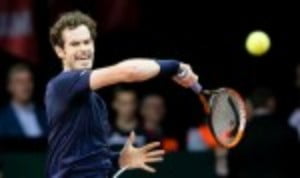 Murray extended his unbeaten streak in Davis Cup matches to 14 (a new British record) after a 7-5 7-6(6) 3-6 4-6 6-3 win over Kei Nishikori in Birmingham.  Murray led by two sets to love but the world No.6 battled back to take the match to a decider, and led by an early break in the decider.

But Murray, who has not lost a match from two sets up since 2005, hung on to clinch victory  – and with it the crucial third point for Leon Smith’s team. At four hours and 54 minutes it was the joint longest match of Murray’s career, equalling his 2012 US Open final win over Novak Djokovic.

Not to be outdone, Djokovic needed four hours and 57 minutes to defeat Mikhail Kukushkin as Serbia defeated Kazakhstan in Belgrade. The 2010 champions will host Great Britain in July, meaning Murray and Djokovic could go head-to-head for the first time in the competition.

It would not be the first time that Murray had played the Serb while representing Great Britain, however. Despite Djokovic leading the head-to-head 22-9, Murray defeated his rival 7-5 7-5 in the semi-finals of the London 2012 Olympics before going on to defeat Roger Federer to win the gold medal.

This time, however, it will be on Djokovic’s stomping ground and will take place less than a week after the Wimbledon final.  It would be a quick turnaround for both players should they decide to play, with the Rogers Cup being moved forward to accommodate the Rio Olympics into this summer’s calendar, but Murray has stated his intention to play the tie.

“It’s obviously a tough match away from home,” said Murray. “The tie comes at a difficult time of the year. I have no idea what surface they’ll put the tie on because Novak plays great on all surfaces.

“It will just be interesting to see what court they choose to play. I think all of them probably play their best tennis on hard courts and with the Olympics just a few weeks away, I imagine it will be quite high on Novak’s priority list and it wouldn’t surprise me if they put it on a hard court.”