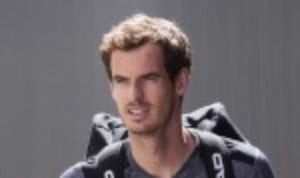 Less than a month after the birth of his baby daughter, Murray is in Birmingham as Great Britain begins the defence of its Davis Cup crown against Japan this weekend, and the world No.2 has announced his intention to play a full part in the 2016 campaign.

After winning the team trophy in 2014, Roger Federer and Stan Wawrinka missed the first round of Switzerland’s Davis Cup last year, while Novak Djokovic has played just one tie for Serbia since the 2013 final.

Providing Great Britain beat Kei Nishikori’s Japan this weekend, the team would face either Serbia or Kazakhstan in the quarter-finals, which would take place less than a week after the Wimbledon final.

It would be a quick turnaround for Murray, with the Rogers Cup being moved forward to accommodate the Rio Olympics into the calendar this summer, but the Scot says he intends to play the tie.

"Providing everything goes well, I would play in the Davis Cup, then have a little break and play Toronto and the Olympics, and potentially not play in Cincinnati," Murray told BBC Sport. "I've always enjoyed representing my country. Statistically I've played by far my best tennis when I've played for Great Britain."