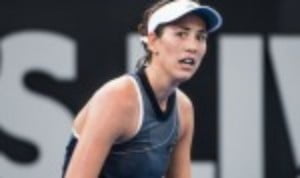 The world No.88, Hsieh Su-Wei, kept her cool on a blisteringly hot afternoon to defeat the Wimbledon champion 7-6(1) 6-4

It’s the biggest win of the 32-year-old’s career and it’s just the second time she has been victorious against a Top 20 opponent.

Her unorthodox style befuddled the No.3 seed, and the crafty veteran was understandably emotional as she took the acclaim of the appreciative crowd.

Muguruza was untidy from the baseline and and her forehand was the source of much of her angst. It’s been an inauspicious start to 2018 for the Spaniard, and she certainly did not enjoy playing in the intense heat.

"She's (Su-Wei) definitely a very tricky opponent, and even more so when she plays well," said Muguruza, who was hampered by a blister on her right foot.

"I think today she played well. I maybe could have done things better, but at the end, she deserves to win. That's really it."

Su-Wei will challenge Agnieszka Radwanska, in the third round on Saturday. The Pole came from behind to eliminate Lesia Tsurenko 2-6 7-5 6-3.

“It was definitely a battle, and I’m very happy to be through,” said the Frenchwoman, in her post-match interview. “The beginning of the match was good for me, but then I got tight. I tried to stay calm and kept fighting until the end.”

Karolina Pliskova enjoyed a smoother passage into the third round. The big-serving Czech blitzed Beatriz Haddad Maia 6-1 6-1 in just 44 minutes.