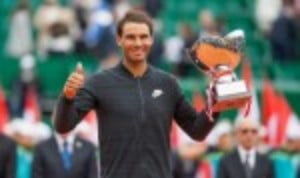 The defending champion, who has bagged 53 clay-court titles – the most won by a player on the surface in the Open era – is hotly-tipped to enjoy another productive spell on the red dirt ahead of next month’s Roland Garros.

If Nadal passes his first test, then he could encounter Karen Khachanov or Adrian Mannarino before a potential blockbuster quarter-final clash with Novak Djokovic.

The Serbian, who is currently working with former coach Marian Vajda, is far from certain to reach the ‘King of Clay’ though, as he will likely encounter the returning Dominic Thiem in the last 32.

Djokovic, a former champion in the place he now calls home, will take on a qualifier in his first match.

Dimitrov, the No.4 seed, is also in the same half of the draw as Nadal, Djokovic and Thiem and he will commence against Filip Krajinovic or Paolo Lorenzi. The Bulgarian is projected to face David Goffin in the last eight.

In the opposing half of the draw, Marin Cilic, the No.2 seed, will open his campaign against either Pablo Cuevas or Fernando Verdasco in an appealing second round contest.

The Australian Open finalist could meet local resident, Milos Raonic, in the last 32. Kyle Edmund is also located in the same quarter as the Croatian, and he will start against the unpredictable Alexandr Dolgopolov.

Alexander Zverev, the No.3 seed, will begin against Gilles Muller or a qualifier. The Miami Open finalist has landed in a fairly soft section of the draw, and Lucas Pouille is a possible last eight foe.

In the standout first round tie, Kei Nishikori will take on Tomas Berdych.

The full draw is available here.