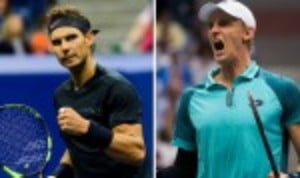 The world No.1 is the overwhelming favourite to end his three-year wait for a hard-court title and capture major number 16. He swatted del Potro aside with unerring ease at the semi-final stage and Anderson will need to produce the performance of his career to emerge victorious.

Nadal and Anderson have met on four occasions – three times on hard-courts – and the Spaniard has prevailed each time. It’s a favourable match-up for the French Open champion and he will not have trouble devising a gameplan for his third major final of the season.

The Spaniard will be eager to return with the same aggression he showed against del Potro on Friday evening and he will be keen to exploit his opponent’s movement by prolonging the baseline exchanges.

Anderson will be acutely aware that he has to play on the front foot and not allow his illustrious rival to settle into a rhythm. The big-serving South African has smacked 118 aces en route to the final and his greatest weapon must fire if he is to have any chance of scoring a major upset.

Anderson, the first South African to reach a Grand Slam final in 33 years, can appear cumbersome and ungainly but the manner in which he dismissed Pablo Carreno Busta in the last four was impressive.

The 31-year-old dropped the first set to the tenacious Spaniard but he maintained a positive demeanour and embraced the challenge. He has often been fragile in pressure situations however he has been calm and collected in the city that never sleeps.

The first set is always of the utmost importance, but it’s of greater significance to the South African. Nadal is an outstanding front-runner and it could be a swift final if Anderson is slow out the traps.

A closely contested final is always desirable, but it’s difficult to believe that Nadal will squander a glorious opportunity to add further silverware to his already overcrowded trophy cabinet.

Anderson has overachieved in reaching the final, but nothing but the ultimate prize will suffice for Nadal. One suspects both men will depart the Big Apple content with their fortnight’s work.