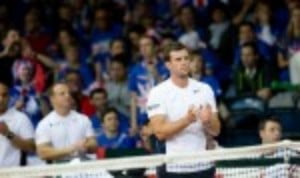 Leon Smith was 22 when Judy Murray asked him to coach Andy Murray. On their first overseas trip together Murray won the prestigious Junior Orange Bowl title Under-12s title. He coached him for six years until shortly after Murray won the 2004 US Open boys' title.

His brothers, Toby and Gary, are both tennis coaches in Scotland. Toby Smith won Tennis Scotland Coach of the Year award in 2011.

He used to coach former British No.1 badminton player Susan Egelstaff (nee Hughes) at Clarkston Tennis Club in Glasgow. Egelstaff won bronze at the Commonwealth Games in Melbourne in 2006 and represented Team GB at London 2012.

Smith was named as Britain’s Davis Cup captain in April 2010. He was the youngest Great Britain captain since Paul Hutchins, who was 30 when he was appointed in 1975.

Smith admitted to being star-struck when he first met Andy Murray’s former coach Ivan Lendl – one of his boyhood heroes.

His first tie as captain was a Europe/Africa Zone Group II relegation play-off against Turkey at Devonshire Park in Eastbourne in July 2010. Great Britain won the tie 5-0, thanks to singles wins from Jamie Baker and James Ward, as well as a doubles victory for Ken Skupski and Colin Fleming.

Since his appointment in April 2010, Smith has won 11 of his 13 matches in charge of the GB Davis Cup team. He first tasted defeat against Belgium in a Group I quarter-final in April 2012.