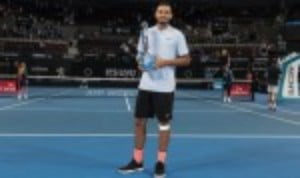 The 22-year-old produced a dazzling display of power and precision as he underlined his Australian Open title credentials. It’s the first time he has entered the winner’s circle on home soil and his 16-month wait for a 4th title is over.

Kyrgios improved as the match progressed and his thunderous serve was as reliable as ever. He cracked 17 aces during the 73-minute contest and never relinquished control from the moment he moved ahead in the first set.

“It was a tough match today, and Nick played great tennis,” acknowledged Harrison during the trophy ceremony.

“This was the first time I’ve ever played in Brisbane and won a match – and I’ve then managed to reach a final. Even though I’d never made it beyond the second round before, I’d always looked forward to coming back because of how fantastic the event is.”

Kyrgios was the overwhelming favourite to pick up the trophy, but he did not have it all his own way in the early stages. Harrison commenced the match with great intensity and performed to a higher standard than he had done throughout the rest of the tournament.

The American created five break-points opportunities in the opening stanza, however his ice-cool opponent rebuffed his advances. Harrison had applied meaningful pressure, but was left with little to show for his endeavours.

In the seventh game, Kyrgios made his move. A return of outstanding quality was followed by a well-directed forehand passing-shot that enabled him to hit the front.

With a break of serve in his pocket, the Australian No.1 began to dictate and dominate. His opponent tried desperately to cling on to his coat-tails, but the world No.21 was performing to a level few can match.

The second set became a procession from the moment Harrison double-faulted to slip 2-1 behind. There was no way back for the American, and Brisbane had their first Australian winner since Lleyton Hewitt four years ago.