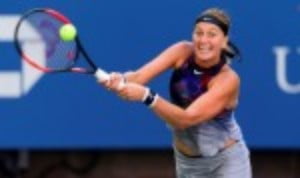 Having brushed aside Alize Cornet in under an hour in the second round, the No.13 seed is beginning to find her best form in Flushing Meadows.

“I'm glad everything has clicked together so far,” said the Czech.

The US Open is not a Grand Slam that she particularly enjoys, as it’s often played in high temperatures. This year, though, conditions have been much more pleasant and Kvitova was involved in the early match this morning.

“I think that I have been lucky with these conditions,” she remarked. “I played the first match and it wasn't humid or hot. I do really feel that things are lucky for me right now.”

Kvitova is playing in her eighth event of 2017, having required extensive surgery on her left hand after a knife attack at her home on December 2016. There is still an ongoing police investigation in the Czech Republic.

“I'm still working on the strength, I think, which is still missing,” said Kvitova when asked about the effect the injury had had on her hand.

“I think that I can hold a little bit better than before. From the beginning, it was really difficult to play some big, aggressive shots. But luckily I found a way to strike it big in the tournament so far.

“The movement is still not great, but as for the grip of the tennis racquet, it’s okay.”

In Garcia, the two-time Wimbledon champion faced a difficult opponent – but she was outstanding from the first ball. “I'm really pleased with the game I showed today,” she said. “The serve was working pretty well today. I think that I moved pretty well. I knew that it would be tough match."

Her next opponent will be Garbine Muguruza. The Czech now has an opportunity to bag her first Top 10 win she defeated the Spaniard in the third round of Beijing last year.

The 27-year-old is following the advice of her coaching team and has not been practicing on her days off.

The strategy seems to be working, so far….