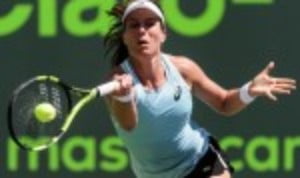 Konta turns on the style

It was the British No.1’s first outing on Stadium Court since defeating Caroline Wozniacki in last year’s final, and it was as if she had never been away.

Not much has gone right for the 26-year-old since reaching the semi-finals of Wimbledon last summer, but she had plenty to smile about after her brief workout against the Belgian.

“I love playing here, it brings back so many good memories,” said a delighted Konta. “Elise is a really good player. She played some great tennis at the beginning of the year so I knew going into the match that I needed to do what she does well.

“I just really tried to take my game to her and managed to do that for big pockets of time. I’m very happy, but it was definitely a fight until the end and it’s never easy to come through.”

Mertens started the campaign so impressively – winning Hobart and reaching the semi-finals of the Australian Open – but positive results have not been forthcoming in recent months.

Her vulnerabilities were badly exposed by her latest rival, and six double-faults in the opening set did little to aid her cause.

Early breaks of serve were traded before Konta stamped her authority on proceedings. The Brit moved 3-2 in front after the Belgian committed consecutive double-faults.

The defending champion was in control, and she was spreading the play nicely with her punishing groundstrokes. She collected another three games in a row to move a step closer to her intended target.

The Belgian’s mood or luck did not improve in the second set. She watched helplessly as her opponent benefited from a fortunate net-cord to move a break and 2-1 ahead.

Konta held the advantage, and she wasted little time applying the finishing touches. She did not concede another game as she sailed into the fourth round.

While Konta was recovering, Venus Williams and Kiki Bertens were engaged in a ferocious battle in an attempt to earn a shot at the reigning champion.

After nearly three hours and numerous momentum shifts, Williams emerged a 5-7 6-3 7-5 winner – but not before saving three match-points.

The 37-year-old has little time to rest and recuperate, though, as she is scheduled to tackle the Brit on Monday afternoon.

Elsewhere on the grounds, Jelena Ostapenko muscled her way past Beatriz Haddad Maia 6-2 7-6(2), Monica Puig kept her vocal supporters happy with a 6-3 7-5 success over Maria Sakkari and Ashleigh Barty eased past Petra Martic 6-4 6-3.

Elina Svitolina continues to make steady progress and she downed Daria Gavrilova 4-6 6-0 6-1. The No.4 seed will take on Barty for a place in the last eight.

Danielle Collins, who made the round of sixteen in Indian Wells, is through to the fourth round after a 4-6 6-2 6-1 triumph over Donna Vekic.