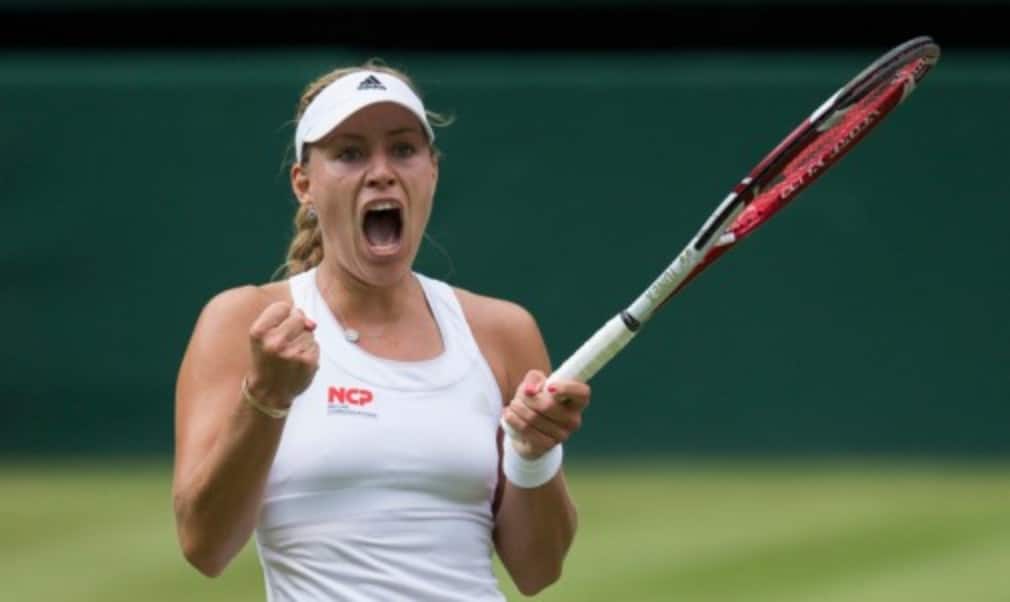 The No.5 seed saved six match points in an enthralling final set but could not prevent Kerber converting her seventh to seal a 7-6(4) 4-6 6-4 victory on Centre Court.

“At the end I was trying to focus just from point to point,” said Kerber. "She will not make mistakes.  If you want to win the match, you need to be aggressive, just go for it. I'm happy that I won the match.  I think she didn't lose the match; I won it.  That feels good.”

“I always consider myself one of the favourites because I've won Grand Slams before; been No. 1 in the world,” said Sharapova. “It's absolutely normal for people to have high expectations of me doing well in Grand Slam stages. I certainly do, as well.  Today could have gone either way, and it didn't go my way.”

Kerber goes on to face Eugenie Bouchard in the last eight, while last year’s runner up Sabine Lisicki booked a quarter-final clash with No.3 seed Simona Halep.

Halep, the highest-ranked player left in the draw, defeated Zarina Diyas 6-3 6-0, while Lisicki moved past Yaroslava Shvedova 6-3 3-6 6-4. Despite serving 20 double faults and requiring a medical timeout in the third set, the German No.19 seed survived to reach the quarter-finals for a fifth time.

With Sharapova out, No.6 seed Petra Kvitova is the only player left in the draw who has won a Grand Slam title. While her rivals in the top half of the draw completed their fourth-round ties, Kvitova sealed her place in the semi-finals with a 6-1 7-5 victory over Barbora Zahlavova Strycova, whose dream run came to an end at the hands of her compatriot after shock wins over Li Na and Caroline Wozniacki.

There is guaranteed to be a Czech finalist, with Kvitova to face compatriot Lucie Safarova in Thursday's semi-finals after the No.23 seed reached her first Grand Slam semi-final with a 6-3 6-1 victory over Ekaterina Makarova.

"It's going to be my third match against Czech girl actually during the Wimbledon, which is unusual," said Kvitova, who has never lost to Safarova in five previous encounters. "We played last time in Eastbourne.  It was big fight until the end.  I'm expecting tough battle again."