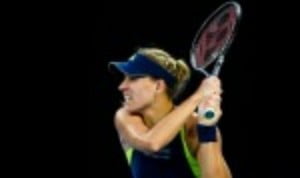 The German was comprehensively outplayed in the opening stanza by the British No.1, but she stamped her authority on the second set and finished a scrappy decider strongly.

Kerber’s latest victory has earned her a shot at Caroline Wozniacki. The Dane, who must keep winning to remain at world No.1 next week, dismissed Monica Niculescu 7-5 6-1.

The German's recent resurgence can be credited to the work done by Wim Fissette. The meticulous Belgian, who assisted Konta last year, has elevated the former world No.1’s game after a dismal 2017 – and she has already registered four Top 20 wins in this campaign.

Konta, who impressed in the previous round against Carla Suarez Navarro, was the dominant force in the early stages. She peppered her opponent’s baseline with her purposeful groundstrokes and claimed the first set for the concession of just one game.

Kerber was more vocal and energised in the second set and she was soon back in contention. The 30-year-old began to dictate proceedings with her forehand and Konta failed to knock the German out her stride.

At 3-3 in the decider, Konta played a poor service game to fall a break behind – and her challenge quickly waned.

‘In the first set I did not play my tennis,” conceded Kerber. “I needed a little time to find my rhythm. In the second set, I was playing point by point, but it’s always tough to play against Johanna. She is a good player and I just went for it in the third set.”

Also into the last eight, is Simona Halep. The Romanian overcame Anastasija Sevastova 6-4 6-3 and will take on CiCi Bellis next, who shocked Karolina Pliskova 7-6(4) 6-3.