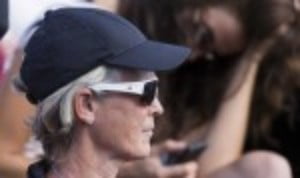 The 56-year-old mother of world No.2 Andy Murray and Australian Open men’s doubles champion Jamie Murray also expressed her frustration at the Fed Cup format, calling for a revamp of the women’s team competition.

Murray, who succeeded Nigel Sears as captain in 2011, twice guided Team GB into the World Group play-offs, but on both occasions the team fell short of reaching the World Group, with defeat to Sweden in 2012 and Argentina the following year. The Europe/Africa Group I is a 16-team round robin event that has been held in Israel for the past six years, which Murray believes is a missed opportunity to "showcase the sport".

“The Fed Cup format is in desperate need of a revamp,” said Murray. “Team competition engages players and fans much more than individual events. It's crucial we use this global competition as a means of attracting and retaining girls in competitive tennis at every level.

“That requires more countries to have the opportunity of playing home and away ties so we can showcase our sport. The GB team has been stuck in the 16-team Euro-Africa Zone for an eternity.

“We play four countries in four successive days in February and only two teams qualify for a play-off opportunity to progress to the World Group. If you don't make the play off, there's nothing until the following February making it impossible to build any momentum on or off the court.

It appears Murray's wish could be granted. In a statement, which praised Murray's "energy and commitment to her team", the ITF said that the board was already looking at reforms to both the Fed Cup and Davis Cup.

Murray will focus on her grass roots programmes, ‘Tennis on the Road’ and 'Miss-Hits’, as well as spending more time with her family, including granddaughter Sophia, who was born last month.

LTA chief executive Michael Downey said: “British Tennis and our players have been fortunate in having a captain of Judy’s unique tennis knowledge, passion for the game, and sense of fun steering our Fed Cup campaign for the last five years.

"No doubt she has left an indelible mark on all the players she has worked with on the team, the support staff and inspiring other GB female coaches along that journey. On behalf of British Tennis, I would also like to personally thank Judy for her commitment.

“In terms of next steps, we will begin an open recruitment process shortly and aim to announce a successor well before the end of the year and 2017’s February Fed Cup tie.”