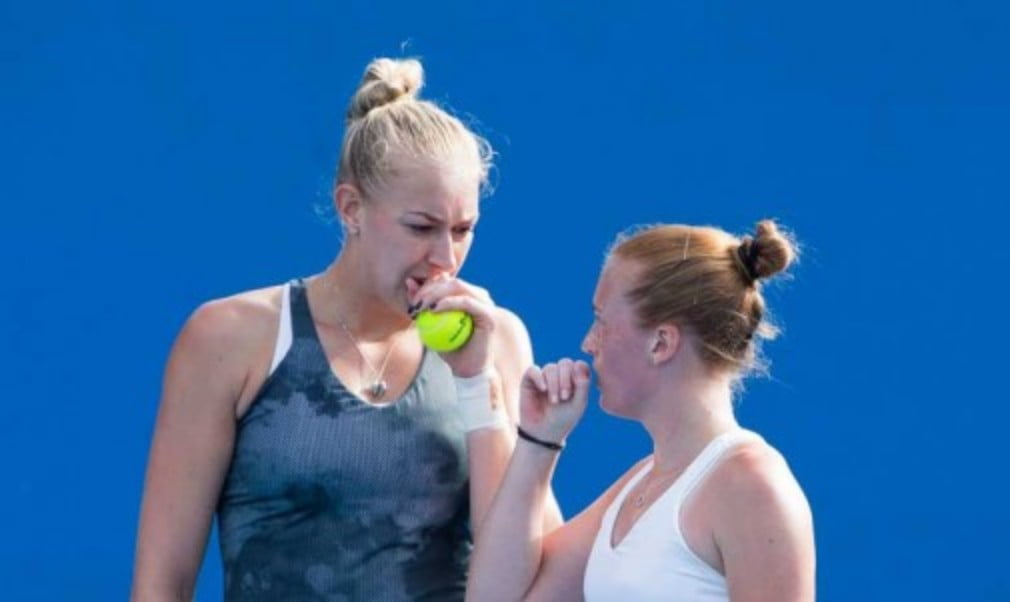 How many rackets do you take on court?
Anna: We both play with Babolat Pure Drive rackets. We normally take three or four with us on court.
Joss: Most of the singles players travel with more but as doubles players our matches are generally shorter. I’ve had a few strings break but in the three years we’ve played together I’ve only smashed one racket.

Do you take spare shoes?
Joss: We are lucky to have quite a few pairs of Mizuno shoes so we don’t have to wear them until they have holes in. If they are getting worn I will travel with a spare pair but normally I try and make sure the pair I am taking will last. A pair of shoes ´è_normally lasts about four weeks – but if we are playing on clay maybe a little less because you are sliding.

What else is in your racket bag?
Anna: Loads of string, spare grips, things like that. I also make sure I have spare ´è_clothes like extra match tops. And I always have a change of socks, especially on clay. The clay stains horribly and it never washes out so you always end up with orange socks.

What drinks and snacks do you take on court?
Anna: We normally have water, electrolyte drinks and some gels that we take onto court. And bananas.
Joss: I’ve only been able to eat bananas for about a year. I had a slight banana-phobia. I really like the taste and obviously they’re a great nutritious snack, but I could only eat them if Anna peeled them. But I’ve got over it now.
Anna: I like mixed nuts too, but just as a snack off-court.

What about medical supplies?
Anna: Normally the tournament doctors have all the medical supplies if we need.
Joss: The tour doctors and physios are really good. We just travel with painkillers really. And sun cream. We’re normally quite good at putting sun cream on. But when we were in Melbourne this year it had been raining for a few days and on the day of our first match we had to warm up indoors and we didn’t think we were even going to get on court. It was still raining when we went back to the locker rooms, got showered and got some food and got changed and then we were told we had 30 minutes until our match started so we had to go and get warmed up and we had to speak to our coaches.
Anna: We thought it was cloudy so we didn’t bother putting sun cream on. The match lasted two and a half hours and it was nearly 30°C. We got really burnt.
Joss: I’ve never peeled like that in my life. It was really painful.

How organised are your racket bags?
Joss: I have one side for my rackets and string and then my shoes and bands in the shoes compartment and then in the main compartment I have all my clothes and stuff. It is pretty well organised.
Anna: We always share a room and our room is a bit of a mess but our actual tennis bag is normally quite well organised. Before we leave in the morning we have a routine where we check things about 20 times. If you have to get a 30-minute bus to the site if you forget something it’s a bit of a nightmare.

Do you have any lucky mascots?
Joss: I have a bear called Pinky – he’s awesome. I got him for my first birthday. He used to be pink but now he’s brown but he’s probably the most well-travelled bear in the world. He is always in my hand luggage but I leave him in the hotel, I don’t take him on court. He’s our lucky mascot.
Anna: We can get quite superstitious. When we won an ITF doubles title in France in April we had to eat at the same restaurant every night.

How important is it for you to wear a supportive sports bra?
Anna: We are either in the gym or on the court, and whatever activity we are doing it is important to have the correct support. Movement in tennis is multidirectional with a lot of rotation, therefore it’s important that our kit gives us the support whilst on the move. We started wearing Brooks Moving Comfort sports bras about a year ago. They’re so comfortable and very supportive. I wouldn’t play without one.
Joss: I really like the colourful ones for training though. I love the Uplift Crossback too.
Anna: My go-to bra is the Rebound Racer – the bottom band is super soft and the straps are adjustable which provides me with a customised fit. During Wimbledon last year I wore the Uprise Crossback in white, because the dress code at Wimbledon is obviously really strict, even with underwear.

Are you surprised that many women on tour just wear crop tops rather than proper sports bras?
Anna: You’re right, some girls just wear a crop top. Sports bras need to be thought about more, they are just as important as your footwear.

This powerhouse of a racerback sports bra has it all. An interior unicup gives support, shape, and complete modesty, while an interior front yoke prevents vertical breast movement. Powermesh zones on the back keep you cool, while adjustable straps and back closure enable the best fit and total control. Perfect for the demands of tennis.