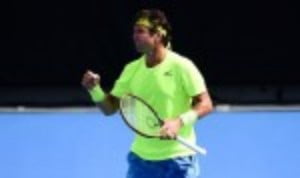 The Tunisian, ranked No.117 in the world, was overjoyed after ousting the top seed and he kissed the court in celebration. It’s the biggest win of his lengthy career and he will challenge Robin Haase in the second round on Wednesday.

From Dimitrov’s perspective, it’s an opportunity missed. He was the only Top 10 player in the draw and the overwhelming favourite to be the last man standing on Saturday evening.

If Dimitrov had enjoyed a productive week in the Middle East, he would have had the opportunity to overtake Marin Cilic, the world No.3, in the rankings. Instead, the Bulgarian is now contemplating a trip to the United States for the first Masters event of the year in Indian Wells.

Elsewhere in Dubai, Borna Coric got the better of Richard Gasquet 6-4 6-3, Karen Khachanov continued his fine form with a 7-6(1) 7-6(0) success over Denis Istomin and Lucas Pouille was a 6-4 6-4 victor over Ernests Gulbis.