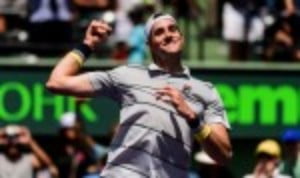 The American has banished the memories of a difficult start to the campaign with his performances in the Sunshine State, and he executed his game-plan to perfection as he registered a 6-1 7-6(2) success.

It’s the fourth time Isner has reached the championship match of a second tier event – and on this occasion there is no member of the ‘Big Four’ around to deny him entry into the winner’s enclosure.

It was a near-flawless display from the 32-year-old, and his all-out-attack approach paid dividends. He launched his sizeable frame into every forehand, and he did not encounter a single break-point as he surged beyond his weary opponent.

Not even Del Potro’s vocal and passionate supporters could inspire him to victory this time. The Indian Wells champion had been toiling physically throughout the tournament, and he simply had nothing left to give.

There will be no Sunshine Double for the Argentine, however he will only have good memories to reflect on before contemplating the upcoming clay-court season.

Isner was untouchable in his victory over Hyeon Chung in the last eight, and he was equally destructive this afternoon. His serve and forehand proved to be a lethal combination as he romped to the first set for the concession of just one game.

Del Potro, who did not crack a single winner in the opener, was more energised and emotionally involved in the second set. Break-point chances were at a premium and it was no surprise when a tiebreak was eventually reached.

Isner snatched an immediate mini-break to move 1-0 ahead after a delightful forehand volley. It was a moment of inspiration from the American, and he won six of the next eight points to extinguish the hopes of his well-beaten opponent.